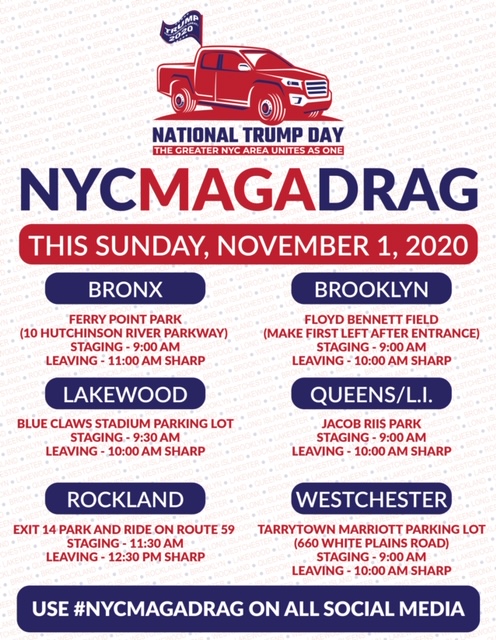 This Sunday, the Greater NYC area will unify to show their support for President Donald J. Trump. Organizers and activists from diverse communities all throughout the area are joining forces to show that New York is not lost, and that there are those in the state that are willing to stand up for liberty and freedom.

NY MAGA Drag the Interstate Rally has been a Sunday tradition now for over 2 months, and for the finale, even more groups will be joining. This time, though, will be special, as it is days away from the re-election of Donald J. Trump. Each caravan will make their way using the different routes from their respective staging areas the main rally point, where there will be a massive in-person rally celebrating National Trump Day. It will definitely be an event to put the unity in community!

For security reasons, the routes and final location are not being disclosed. Everyone is asked to go to their most convenient staging area, where they will follow the caravan for an amazing and fun filled day of patriotism.

The included groups are from The Bronx, Brooklyn, Lakewood, Long Island, Queens, Rockland, and Westchester. The groups would like to thank the many of those that have made all the previous events a success. Also, a shout-out to this weeks DJ, Ariel Katz from Ahava Productions.

Those responsible for making this event a success are as follows, listed by their respective areas: