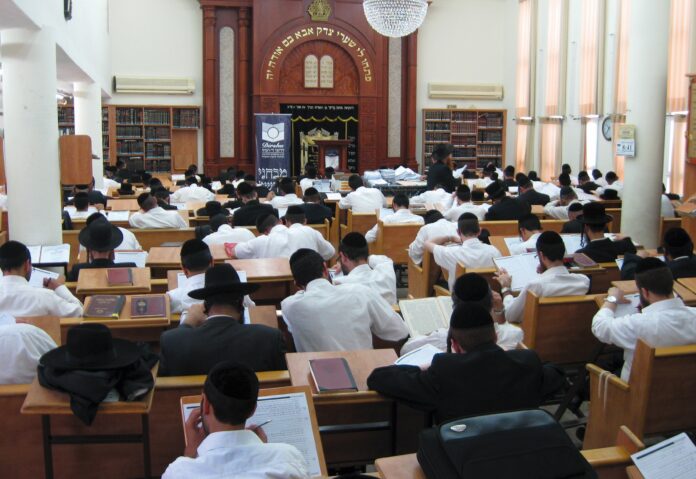 A day before, it appeared that the second test in the Machzor Sheini of Daf HaYomi B’Halacha would be a routine Dirshu test despite it being a bit of a milestone. Lomdei Daf HaYomi B’Halacha were completing the laws of tzitzis and progressing to the laws of tefillin. The test in Eretz Yisroel was scheduled for this past Friday morning, 5 Iyar/May 6.

In the city of Elad, the main Dirshu testing site is at the Derech Chaim Shul and what transpired the night before, a few feet from the Derech Chaim Shul, changed everything. On Thursday night, bloodthirsty Palestinian terrorists infiltrated the city and murdered three Jews in cold blood in the most gruesome way. May the zechus of the holy neshamos of those kedoshim – Oren Ben Yiftah, Yonatan Havakuk, and Boaz Gol, hy”d, protect Klal Yisroel.

Even worse, the terrorists escaped before they could be apprehended, and Elad inhabitants were advised by police and security services to stay at home until the killers were apprehended.

“That morning, I met with a senior police officer who had arrived in Elad, and I asked him if we could hold the Dirshu test, or whether it would be advisable to be cautious and cancel it, given that the manhunt after the terrorists was still in high gear.

“The officer told me not to worry – he explained that Elad was full of security forces,” Rabbi Barkatz said. “I was amazed at the next words I heard from the clearly non-religious officer. He added that he was familiar with the Dirshu program and recognized its importance. “It was an amazing testament to the unique nature of Dirshu, and its importance throughout the country, even beyond the frum enclaves.

“To my surprise, everyone came to be tested; not a single regular was missing! Now remember, paralyzing terror had gripped the residents of our city, yet the test is such an integral component in the lives of lomdei Dirshu that they still came!”