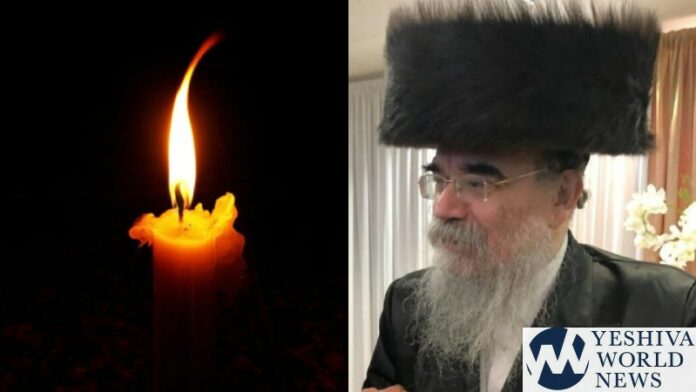 YWN regrets to inform you of the Petira of HaRav Avrohom Pinter ZT”L. He was 70 and was Niftar from COVID-19.

The Niftar was a tremendous Talmid Chochom and the head of the “Yesodei Hatorah” Mosdos in London, the largest Chareidi schools in London, with well over 1,000 students. He was the son of HaRav Shmuel Shmelke Pinter ZT”L, the Av Bais Din Bikvask, and the founder of the Yesodei Hatorah Mosdos.

His passing is a tremendous blow to the Stamford Hill Kehillah, as the Niftar was involved in a multitude of Chinuch and Chesed organizations.

As one community activist described the Niftar to YWN:

“Rav Pinter one of the most influential members of the Kehilla, and was involved in literally every single decision made on behalf of the Tzibur. He was on every single committee representing the community from kashrus to Chinuch. He has contacts at the highest government levels, and was the face of Chareidi Jewry of the U.K. He was respected by every community including the Muslim community. An outpouring of condolences have already surfaced on social media by elected officials and community activists from across the religious spectrum.”

His passing leaves a tremendous gaping hole in the Stamford Hill and entire London Jewish community.

Sending my love to Rabbi Pinter’s family. He did so much to help community relations in London and will be missed by so many. May his memory be a blessing. https://t.co/hBCtO2Mxth

Giant of community politics passed away today, Rabbi Abraham Pinter. I knew him for over thirty years. He had so much to be proud of: his beautiful family; his work amongst the people and above all the Yesodey Hatorah School. He will be mourned by all pic.twitter.com/oJByNG6ReH

My friend Rabbi Pinter of Stamford Hill just passed from this terrible plague. I am going to miss him terribly. יהי זכרו ברוך https://t.co/6PaG3pDZXq

Baruch Dayan HaEmes. Rabbi Avroham Pinter z”l who passed away today. A giant of the Anglo Jewish world, of Stamford Hill and of Hackney Labour. An emissary for his community, a fixer of problems, a rare spirit of humour and wisdom. The world is a little poorer tonight. pic.twitter.com/NCbtYvlyto

So sad to hear of the death of Rabbi Avrohom Pinter, a leader of great wisdom in the Stamford Hill Charedi Jewish community, a former Hackney Labour cllr, and someone who treated me with great friendship from the moment I started working there in '98. May his memory be a blessing

My condolences to Rabbi Pinter's family and his community in Stamford Hill https://t.co/mbyC9nbRMq

Sad to hear massively respected Rabbi Pinter is in ICU. Thoughts with him, his fam & our local Haredi Jewish community here in Cazenove / Stamford Hill.

נפל שר בישראל – Rabbi Avrohom Pinter z"l
We have truly lost a colossus who more than anyone was the face and voice of our Stamford Hill and broader UK Chareidi community for last 4 decades. His lasting legacy will no doubt be the school he established and led throughout pic.twitter.com/92rjSULUuT