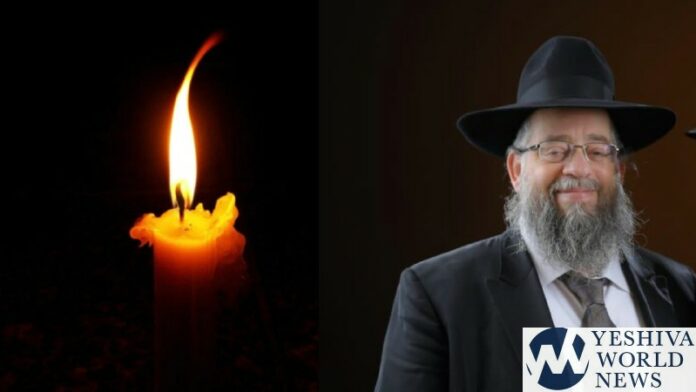 Baruch Dayan Ha’emes. The founder and chairman of the Gift of Life Association (Matnat Chaim), Rabbi Yeshayahu Heber, ZT”L, passed away on Thursday evening at the age of 55 in Hadassah Ein Kerem Hospital due to the coronavirus.

Nearly 1,000 people donated a kidney thanks to his activities.

Rav Heber’s condition deteriorated on Thursday afternoon. Rabbanim added the name Raphael and his family asked that people say Tehillim across the globe. Unfortunately, these efforts did not change the end result and Rav Heber passed away later on Thursday evening.

Rav Heber founded the Matnat Chaim organization, a non-profit dedicated to the facilitation of altruistic kidney donations, quitting his job as a principal of a school and teacher, and devoting his life to the organization.

Since then, hundreds of lives have been saved through Matnat Chaim and Rav Heber’s selfless work has been widely recognized in Israel and abroad.

Prime Minister Binyamin Netanyahu “expressed his deep sorrow about the passing” of the rabbi, saying Heber “instilled the awareness of the importance of donations in the general public.”

“Thanks to him, hundreds of people in Israel were granted a new life,” Netanyahu said. “Rabbi Heber was a model of humanity, kindness and mutual responsibility.”

“The parents, children, brothers and sisters that owe him the lives of their loved ones, and all of us who were impacted by the power of his giving to the community, are grieving tonight,” Gantz said.