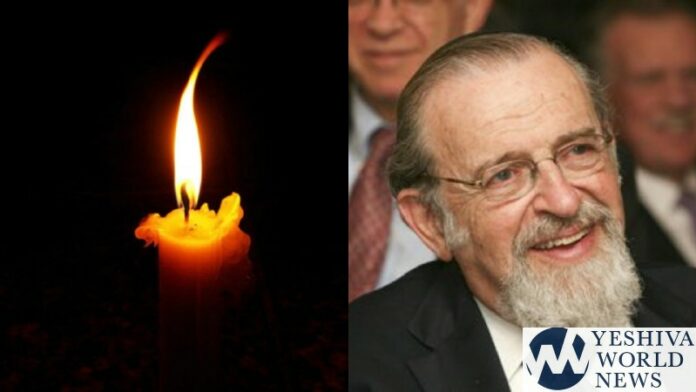 YWN regrets to inform you of the Petira of Rabbi Dr. Norman Lamm Z”L, the president emeritus of Yeshiva University. He was 92. Sadly, Rabbi Lamm lost his wife just one month ago to COVID-19.

The Niftar held a Ph.D. in Jewish philosophy and was the third President of Yeshiva University, the first to be born in the United States. He was a Talmid of Rabbi Joseph B. Soloveitchik who ordained him at the Rabbi Isaac Elchanan Theological Seminary, Yeshiva University’s rabbinical school in 1951.

In his youth, Rabbi Lamm attended Mesivta Torah Vodaath in Williamsburg, Brooklyn. At Yeshiva College, the men’s undergraduate school of Yeshiva University, he obtained a degree in chemistry in 1949, at which he excelled. He was the secular studies valedictorian of his class. He also attended a secular postgraduate college, the Polytechnic Institute of Brooklyn. He considered a career in science, but was persuaded by Rabbi Dr. Samuel Belkin, the second President of Yeshiva University (successor of Rabbi Dr. Bernard Revel), to join the faculty at Yeshiva University.

His grandfather was Hagaon HaRav Yehoshua Baumol A”L (1880–1948) who authored the Responsa – Emek Halakha. In that work, Rabbi Baumol cited several insights from his young grandson, and even included responsa to Lamm’s questions.

He obtained his Ph.D. in 1966, and was elected President of Yeshiva University in August, 1976. When he took over the institution he helped save it from looming bankruptcy and raised its endowments as well as its academic rating.

Rabbi Lamm stepped down as President in 2003, and was succeeded by Richard Joel.