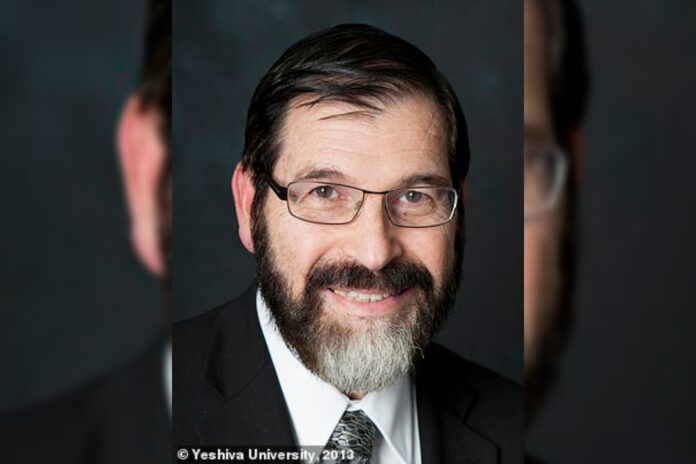 The Rabbi at the Young Israel of New Rochelle, who also teaches at Yeshiva University, has tested positive for the coronavirus, the school announced overnight.

Rabbi Reuven Fink is among 17 patients connected to a 50-year-old lawyer from New Rochelle and 22 statewide.

YWN has confirmed that he is home and resting, and gave a Daf Yomi Shiur from his home over video hookup to dozens of people from the Shul who are quarantined.

The rabbi oversees Young Israel of New Rochelle, where the man Davens.

“Rabbi Reuven Fink, the Rabbi of the Young Israel of New Rochelle, who has been in self-quarantine for being in contact with his congregant who has tested positive has announced to his congregation that he also tested positive with the coronavirus,” the school posted overnight. “Rabbi Fink teaches two undergraduate classes at our Washington Heights campus. We have reached out to his students and recommended as a precautionary measure to self-quarantine until further notice.”

RABBI FINK SENT THE FOLLOWING WORDS OF CHIKUK TO HIS COMMUNITY ON FRIDAY MORNING:

As so many of us are now contemplating going into a Shabbos of seclusion, I want to share a few thoughts with you.

We all woke up Tuesday morning prepared for our usual schedules of work or school or whatever we usually do. By late afternoon we learned that the State and the County health departments ordered a voluntary quarantine of those who were in a number of venues where the Coronavirus might have been. I said to myself, “but at all of those places we were performing mitzvos.” To be davening in shul, attending a funeral, attending bar and bat mitzvah celebrations- all are good deeds, mitzvot!” And yet, we were about to commence an unpleasant course of action: Isolation and quarantine are words that evoke fear. I must confess I was frightened that we might have an epidemic, a pandemic in our community. Michael, Judy and I met with the health officials and tried to explain that quarantine of almost an entire congregation was an overarching edict. They quickly disavowed us of any such thinking, and announced the shutdown of the Shul before we could even announce it to our own members.

We were locked in our homes. What would we do? This Shabbos is Parshat Zachor!! We all know it is incumbent upon Jews to hear Zachor being read from the Torah. Additionally, Elior Paley’s Bar-mitzvah was scheduled for Shabbos. Elior had studied his Parsha so long and hard. What would be? And then, Tess Peiper’s Bat-mitzvah was on Sunday. She would be so disappointed! Our friend and member Dahlia Nordlicht lost her dear father, Albert Kalter, and is sitting shiva. We who are in quarantine are not able to visit her in her time of need. People’s lives are so disrupted. And certainly, our minds never diverted from thinking about and praying for our good friend Lawrence Garbuz who lay in the hospital in such serious condition. We thought of Adina and the kids and what they were going through in comparison to what our situation was.

I told myself we would work things out. The people of New Rochelle are resourceful people.

And we prayed. Everyone was emailing for Lawrence’s Hebrew name and wanted to know which tehillim should be recited. People who were not in quarantine were calling to arrange to help people in need, particularly those who were elderly or sick. Neighboring communities volunteered to help. Our neighbors in Scarsdale and White Plains shopped and made deliveries to many. Seasons and Chickies tried to make ordering easy. So many good people did so much good. And it continues.

Over the past day or two other members of our congregation were tested and found to be positive for the Coronavirus. I as well found out an hour ago that I too am infected with the virus. I can now reassure you that it is possible Thank G-d to get through this virus without a special vaccine. I have the virus and am doing reasonably well. But I must caution all of you who have had personal contact with me to seek counsel from your health practitioner as to how to proceed.

As a Shul we must worry about religion. We tried to address in writing what people could do for the observance of yahrzeit and recitation of kaddish. We worked out a plan to read Zachor on Purim. Daf Yomi was taught online thanks to Chaim Jaroslowicz and “ZOOM.” We had two shiurim today given by me and by Rabbi Axelrod about Purim topics.

A crisis can bring out the best in people. It is bringing out the best in us.
Admittedly, it is hard to comply with the burden the State has placed on us. But as we see, despite all these measures the amount of people testing positive is increasing. We all have to be careful to comply. I have heard alarming reports that some of our members who should remain in quarantine have repeatedly violated it. This, obviously, is irresponsible. It is a Chillul Hashem and reflects poorly on our community. One must think very seriously about the consequences of one’s actions – before they act.

There are some positive elements that can be found in looking at our predicament. It slows down the pace of our frenetic lives. That can be positive. It can give us more time with our families. Maybe that book that we never got around to reading can be read now. Maybe we always wanted to find time to learn Torah. We now have that opportunity. I can’t remember the last time I davened without a minyan for shacharis. But my davening this morning was much slower than usual.

This circumstance certainly gives us the opportunity to think. Our attention turns to mortality and our vulnerability. We sometimes find ourselves victims of life’s fragility and tentativeness. This is one of those times. It can help us to reorient our ultimate goals in life. Contemplation is good for the soul.

I can’t help but wonder if perhaps I discovered a fantastic insight into current events in this morning’s Daf Yomi.

The Talmud is in the midst of discussing various seminal events in the life of King David. It tells of an error he made. He decided to conduct a census of his kingdom. He wanted to have an accurate count of Israel’s population. According to the Torah a census can only take place by counting tokens that represent a person but not by counting the people themselves. The Torah says: count half-shekels so there “will not be a pestilence when you count them.” King David ignored this rule and counted people. The Navi tells us that a plague commenced as a result. The strange occurrence that guided that plague was that exactly 100 people died per day. The prophets and Sages of that era ascertained from Heaven that if they would institute a new mitzvah, the plague would end. They legislated a rabbinic mitzvah to recite 100 Brachot each day. This is among the seven rabbinic mitzvot, along with lighting candles before Shabbat and the recitation of Hallel. But somehow this particular mitzvah has been lost to us during our bitter history.

Could it be only a coincidence that we learn this portion in the Talmud specifically today during this crisis of a possible pandemic? Perhaps. But perhaps we can take a lesson from it. Maybe we can accept upon ourselves to be more mindful and meticulous in reciting brachot. A bracha, a blessing, is our way of acknowledging the profound awareness that we have of G-d in our lives. A blessing can elevate the most mundane activity into something lofty and holy. It takes seconds but launches us into eternity.

We still have a way to go in handling our communal situation. Together we can persevere and triumph over these challenges. With our ever-abiding faith in G-d who is the Healer, we pray that we, as well as our fellow Americans and the peoples of the world will conquer this disease במהרה בימנו אמן.