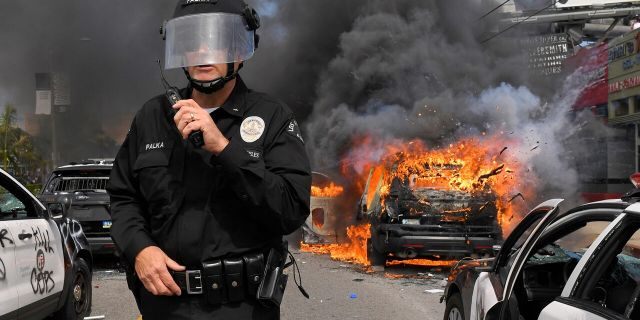 National Guard troops deployed onto the streets of Los Angeles early Sunday morning as looting, vandalism and violence intensified and the Police Department struggled to restore order after two days of discord.

The dramatic move came after a day of deteriorating conditions, as protests marking the killing of George Floyd by Minneapolis police began peacefully but turned violent. Demonstrators burned Los Angeles Police Department cruisers, threw objects at officers and looted retail businesses, including the Apple Store and Nordstrom at the Grove shopping mall. Some protesters even made it to Beverly Hills’ famed Rodeo Drive, where they were met by a line of officers.

Police and protesters spent hours in a tense standoff, with police shooting rubber bullets and striking demonstrators with batons while several police cars were set on fire and other vehicles vandalized.

About a dozen destroyed or defaced LAPD cruisers sat abandoned. The odor of charred rubber wafted through the area. The cruisers’ windows were smashed, mirrors ripped out and the vehicles’ bodies scrawled with anti-police slogans.

Rabbi Ganzweig Shul on Beverly Blvd in Los Angeles has been vandalized:

Many Jewish-owned businesses were vandalized and looted by packs of marauding thugs:

Some Jewish business-owners went out and physically protested their property:

See the aftermath this morning in Los Angeles:

The Frum community is seen in the next video cheering the police as they arrived in the community: