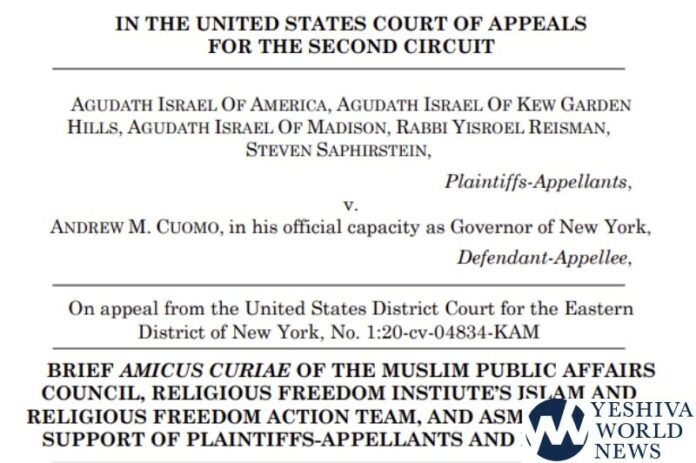 Early this morning the Muslim Public Affairs Council filed an amicus (friend of the court) brief with the Second Circuit in support of Agudah’s lawsuit challenging the executive order targeting our community. They explained that they “believe that the Islamic faith teaches Muslims to want for others what they want for themselves, and that supporting the Jewish community in this case is in the interest of the common good.”

YWN can exclusively bring you the opening pages of their brief.

“Since ancient times, peoples around the world have symbolically vested the perceived wrongdoings of their community onto “scapegoats,” who are sacrificed in the hope that those wrongdoings will be expiated, and the hard times will pass. Too often, religious minorities have served as scapegoats in times of sickness, war, and fear—from Jews during the Black Death, to Jehovah’s Witnesses During WWII, to Muslims after 9/11. Latest in a long and troubling line of such incidents are the statements and policies of Governor Cuomo blaming Orthodox Jewish communities for the spread of COVID-19 and specifically targeting them for closures and restrictions, all despite a dearth of evidence.

“The Governor’s orders impose restrictions on predominantly Jewish communities that are harsher than those on neighborhoods with similar COVID rates. Indeed, the Governor candidly acknowledged that the Jewish community was the “target” and the “problem.” Such a law, targeting religious conduct, is the antithesis of a neutral and generally applicable law. See Central Rabbinical Congress v. New York City Dep’t of Health & Mental Hygiene, 763 F.3d 183, 193 (2d Cir. 2014).

“Further, far from being narrowly tailored, Government officials have admitted that the new restrictions are “blunt” and carved with a “hatchet,” as opposed to “a highly nuanced, sophisticated response.” And the impetus of the policy is a “fear driven response” meant to manage the “anxiety” of its constituents. Thankfully, the First Amendment does not sanction religious bigotry as a form of anxiety management. See Church of the Lukumi Babalu Aye v. City of Hialeah, 508 U.S. 520, 531–33 (1993).

“The stakes of this Court’s ruling are high. In New York today, hate crimes against Jewish Americans are at their highest levels since 1992.2 The Government’s accusatory rhetoric is fanning the flames of an already precarious position for the City’s Orthodox Jews, and this irresponsible behavior can have deadly consequences. This Court should strike down government policies that are rooted in and encourage such dangerous religious hostility. The First Amendment demands nothing less.