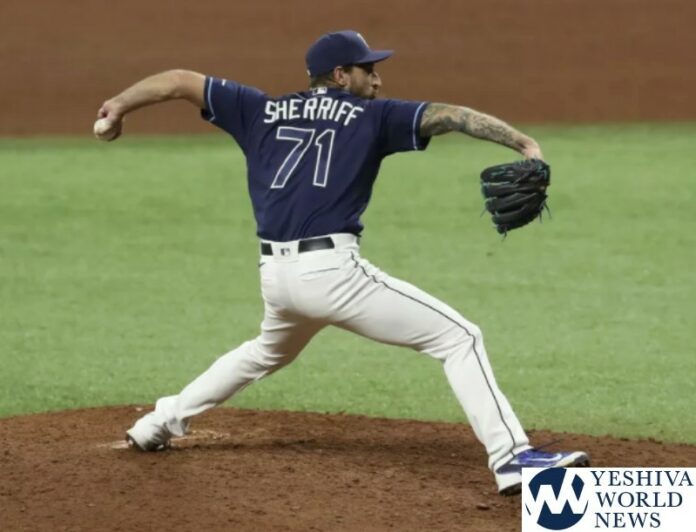 Ryan Sherrif of the Tampa Bay Rays took the mound on Friday night and pitched a scoreless inning against the Los Angeles Dodgers. Even though the Rays eventually lost the game by a score of 6-2, Sherrif made history as one of only a handful of Jewish players to pitch in the World Series.

In Game 5, which took place on Sunday, and which the Rays also lost, Sherriff once again got his job done when he came on in relief and threw a perfect eighth inning when he retired all three batters he faced in order. In spite of his efforts, the Rays lost the game 4-2 and the Dodgers took a 3-2 lead in the series which continues on Tuesday night.

On the opposite side of the field, the Los Angeles Dodgers have Joc Pederson, who is holding the fourth outfielder’s position as a backup to the three starters, who is also Jewish. Had Sheriff continued pitching into the ninth inning on Sunday, he would have faced Pederson in what would have been a truly rare World Series moment with a Jewish pitcher facing a Jewish batter.

Sherrif hails from Culver City California and was called up to the Rays’ lineup just before the September 1st cutoff that allowed him to play in the postseason. Sherrif appeared in 10 games throughout the season and pitched a total of 9 and 2/3rd innings and gave up no runs to have a perfect ERA of 0.00.

Sheriff’s father passed away in 2012 due to blood cancer and his mother pushed him to continue his career. Sherrif’s grandparents were Holocaust survivors from Poland and bot had been in concentration camps during the war.

Sherriff pitched for the Israel National Baseball Team in the 2017 World Baseball Classic qualifiers and knew that his grandparents and father would have been proud to see him pitch for the Jewish Homeland.

Sherriff told Joshua Halickman of the Jerusalem Post that “Being able to pitch for Team Israel made me feel very appreciative for everything that they had gone through. Just to represent the Jewish heritage for them was just a great honor for me. She [my grandmother] would have been stoked. She would have been really happy if she was still alive today.”