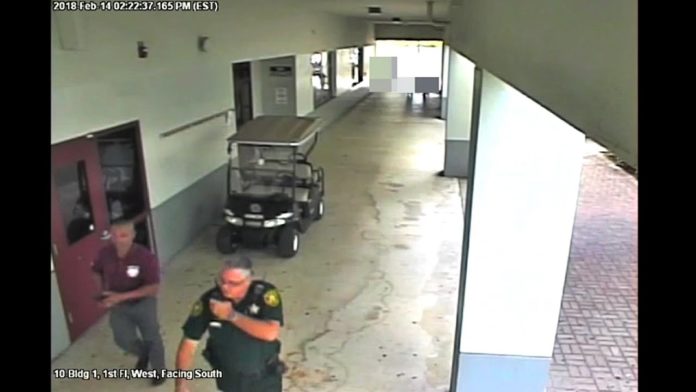 Security video shows a Florida sheriff’s deputy going toward the high school building while a gunman massacred 17 students and staff members, but he then backed away and stayed outside with his handgun drawn.

The Broward County Sheriff’s Office released the video Thursday showing Deputy Scot Peterson’s actions during the Feb. 14 shooting. It shows him and two staff members rushing in a cart toward the three-story freshman building where the shootings happened. When they arrive, Peterson pulls his weapon and goes forward but then retreats and takes up a position outside the building.

During most of the six minutes of shooting, the camera’s view of Peterson is blocked by a light pole but parts of him occasionally appear. He never went inside. There is no sound on the video.

About 11 minutes after the 19-year-old suspect Nikolas Cruz began shooting, the video shows a glimpse of Coral Springs police officers who have arrived at the school rushing toward the building. By then, Cruz had fled. He was arrested an hour later about a mile from the school.

Sheriff Scott Israel blasted Peterson eight days after the shooting, saying the deputy should have entered the building immediately, “addressed the killer, killed the killer.”

The 54-year-old deputy retired rather than accept a suspension. He is still being investigated by internal affairs.

Peterson has denied wrongdoing. In a statement issued through his lawyer shortly after his retirement, he said he thought the shots were being fired from outside the school.

But in radio transmissions released last week it appears the 32-year veteran deputy knew almost immediately the shots were coming from inside the freshman building.

John Bostain, an independent police trainer, reviewed the video at the request of The Associated Press. He said it confirms that Peterson should have entered the building: that is an almost-universal response in police training after the 1999 Columbine High and 2012 Sandy Hook school shootings. He said the question is why he didn’t: was it because of Peterson’s individual character or something about the culture in the Broward Sheriff’s Office that made him avoid a deadly force situation?

Cruz faces 34 murder and attempted murder charges in the attack and a judge entered a plea of not guilty on his behalf Wednesday. Prosecutors say they will seek the death penalty. Cruz’s public defenders have said he would plead guilty in exchange for a life sentence.

A Florida judge earlier this week agreed with news outlets including the AP that the video should be released.

Police and school officials had resisted the release, saying it was evidence in an active investigation. Video of what happened inside the school was not released.