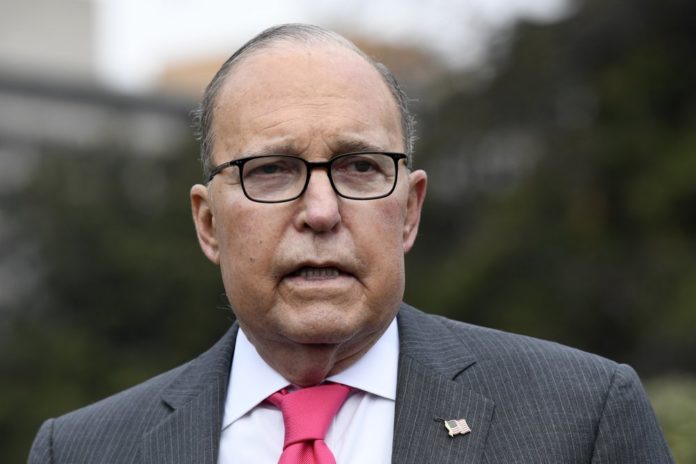 President Donald Trump is “fully behind” Stephen Moore, his choice to help lead the Federal Reserve, despite unflattering details that have come to light about Moore’s personal life, a top White House official said Wednesday while also complaining about Washington’s “toxic” environment.

“I spoke to the president yesterday. He completely supports Steve. I certainly do. People are being awful hard on him … This town is a toxic town in some respects,” Larry Kudlow, director of the National Economic Council, told reporters. “So we are fully behind him, fully behind him.”

Kudlow described Moore as “a smart guy” who “would be a breath of fresh air on the Fed, and so far it’s all systems go.” He was at an event sponsored by the Christian Science Monitor.

Moore is a former Trump campaign adviser who helped design massive tax cuts the president signed into law in 2017. He has been affiliated with multiple conservative groups, including as chief economist for the Heritage Foundation, leading some economists to say Moore could inject politics into an institution that strives to keep decisions about monetary policy free of political influence.

Moore has taken a series of controversial stances on the Fed, and has acknowledged the need to learn more about how the central bank works.

He also has said Fed Chairman Jerome Powell should be fired for rate hikes last year that Moore claims undermined the benefits from Trump’s tax cuts. Trump has also publicly come down hard on Powell over those increases. The Fed recently announced it will not raise interest rates in 2019, a decision Powell said was not influenced by the president.

Trump has yet to forward Moore’s nomination to serve on the Fed’s Board of Governors to the Senate for confirmation. His required background check has yet to be completed.

According to published reports and court records, Moore had a lien of more than $75,000 filed against him in January 2018 for unpaid taxes, and has fallen behind on alimony and child support payments to his ex-wife.

After Trump’s announcement in March, Moore said his criticisms of the Fed, including his suggestion about dismissing Powell, were likely written “in a time of anger.”

On the separate issue of tariffs, Kudlow made clear that Trump would veto legislation being considered by Senate Finance Committee Chairman Chuck Grassley, R-Iowa, that, among other things, would scale back the president’s virtually unlimited power to impose tariffs on imports that he declares a threat to national security.

Trump slapped tariffs on hundreds of billions of dollars in Chinese imports last year and believes China would not currently be negotiating a trade deal with the U.S. had he not imposed the levies, Kudlow said.

A Chinese delegation is in Washington this week for another round of talks, following a U.S. team’s trip to Beijing last week.