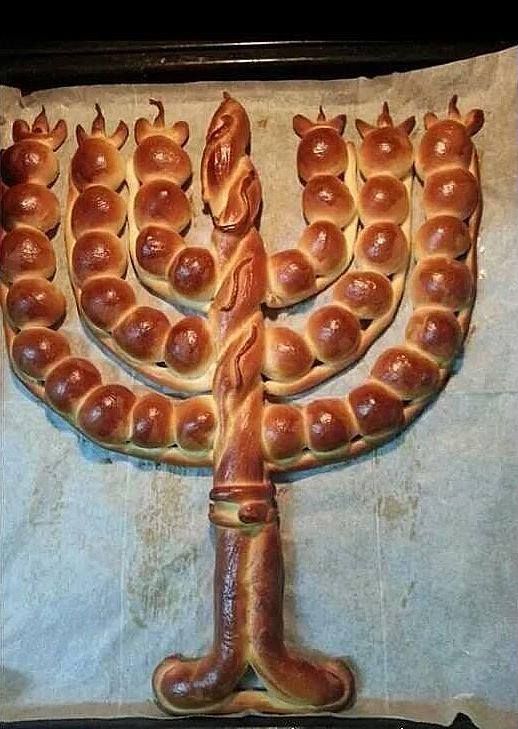 One can divide the guests and family into females versus males and pit each against each other.  Since it is multiple choice, the teams do not have to fairly divided.  You can have a Brisk Kollel guy on one side, and a 5th grader on the other side.  One method of playing is to appoint a captain for each side.  The first person on the entire team to raise their hand, must answer the question as soon as the and is raised.  If it is wrong the question automatically goes to the other team.  The captain of the other team chooses who on his or her team can answer the question.  This helps empower that captain too.  After the first question is answered, the other team answers the next question and it goes back and forth.

Another option is to have the captain can choose either a parsha question or a Chanukah question.

The winning team can get double desserts or another prize.

A]  It is worthwhile that she do so. B] No, it will create a safek for her havdallah later

A: It is forbidden. B] Yes, mitzvos lav lehanos nitnu

A:  Chas vechalilah B This is what they say in the name of the Chazon Ish zatzal.

A: One should NOT do so..  B] It is a safaik.  C] It does not lower the lighting quality

A] Because there were two Nissim – the oil and the nitzachon   B] It is because the entire miracle happened because of a hidur – a higher level of observance – since Tumah is permitted for a public use.

A] They would have been much worse – like the misyavnim  B] :  The person should have exerted more oversight on his child’s Chinuch than he did.  He is himself [a bit] at fault.

A] We learn the halachos of Chanukah. B] Yes, there is an inyan

A: Yes, we should keep all the minhagim of chanukah B] No – it teaches holelus and bitul Torah Chanukah is kodesh kodashim C] Whoever does so, does so.

Sameach is the Notrikun (abbreviation) of Shabbos, Milah and Chodesh. These are the three areas in which the Seleucid Greeks limited Jewish religious practice.  This was pointed out by the Gerrer Rebbe.

A] Muttar B] Assur C] Machkes

Tosfos (Taanis 18a “Rav”) writes that one may fast beforehand as these halachos were, in fact, negated even though Chanukah and Purim were not.  This is the Rambam’s opinion as well, and that of the Tur and the Shulchan Aruch.  The Rif (Megillah 4a ), Ran, and the RaZah (cited by the Bach in OC 686), however, are stringent.  The Pri Chadash is also stringent, disagreeing with the Shulchan Aruch.

20] There is a prohibition to perform work within thirty minutes of candle-lighting time (See 672:10).  What type of work or activity is forbidden?   Anything that can cause one to continue. Rav Elyashiv explained (Kuntrus Hilchos Chanukah page 6)  that even cooking or baking during this time is forbidden for someone who has an actual obligation to light.  The reason why this is more stringent than Chol HaMoed is because the reason for this prohibition is on account of…  A]  Chshada B] This is entirely derabanan and kol haover bedivrei chachomim yenashcheno nachas.. C] Pirsumei Nissa – publicizing the miracle. D] NOTA

Miketz Questions   All Answers should be according to Rashi. (NOTA means none of the above.  Also, Do not say the numbers 41: etc). Questions were adapted from Aish.com website and multiple choice answers were added.