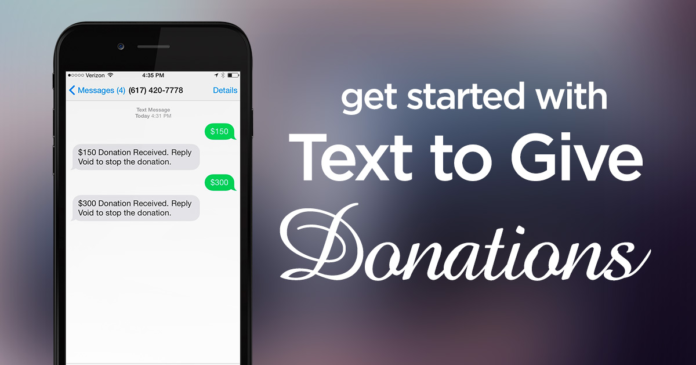 When you think of donations the first thing that may come to mind is Santa Claus ringing a bell outside a post office. In the olden days volunteers had to go out to find and persuade potential donors to give whatever they could. Unfortunately, this method was time-consuming and often didn’t return many donations. However, a new concept in fundraising called ‘text to give’ makes use of cell phones for quick and easy giving.

Fundraising with Text to Give

The Text to Give system is simple: An organization or nonprofit advertises a code anyone can text to their number and instantly donate. The code often involves a keyword and an amount which returns a special link for the donor to type in their card details. The process aims to make donating quick and painless, perfect for our speedy culture.

There is also a different system called text-to-donate which is also often used. This process takes the donor to a page where they decide the amount they would like to donate. This is more complex and users often favor text to give because it usually gives predetermined donation amounts. Ultimately this makes it easier and more likely to succeed.

4 Tips for Launching a Success Text to Give Campaign

This system gained most attention during the events after the 2010 earthquake in Haiti. The Red Cross asked for donations with the simple message “Text Haiti to 90999.” This message appeared everywhere including television, newspapers, and online advertisements. Because the process was simple and easy, the Red Cross received millions of dollars in aid.

Taking the Red Cross’ example, users would simply text the word ‘Haiti’ to the number 90999 with their new Apple iPHone XR. This returned a link with options to donate different amounts. If the keywords are too complex and vague, the donor may forget or lose interest in donating. They may also misspell the keyword, leading to abandoned funds. The keyword should also perfectly describe the purpose of the donation- “Haiti” was ideal because donors knew exactly that they were donating for Haiti relief.

After determining the keyword, an organization has to figure out how to let people know about their cause. The text to give message can fit within the nonprofit’s existing marketing campaigns. The campaigns often involve posting the keyword and number on all social media accounts and emails. The message can even appear on email signatures and weekly newsletters or flyers.

Tip 3: It Should Be Easy to Give

Because of the nature and speed of digital information, we expect speedy results with every online transaction. Your text to give campaign should be no different and create the easiest process for the donor. The most elegant campaigns follow three simple steps:

This process greatly increases the chances of people donating. If the process were any more difficult, the donor may get frustrated and give up half-way.

When people make a donation, they want to be thanked for it. If someone gives a certain amount of money and receives nothing but a confirmation receipt, they may feel unappreciated. That’s why it’s important to follow-up through either an email thanking them for their donation, or a quick text. Many nonprofits feature their donors on their social media pages, which can give the donor a source of pride they can share with others.

Ready-Made Text to Give Platforms

The most popular currently of all platform providers is Aplos. Extremely convenient, it allows for one time donations and reccuring, automatic gifts to your targeted charity.    It’ one of the most regularly seen today at fundraisers, volunteer events, and even on social media causes.


There are two types of options when dealing with Aplos.  The first is their basic suite, which is only $29.50 per month.   For those that need a more elaborate setup, there is an Advanced Accounting upgrade which requires a direct contact for quotes.  However, the basic a powerful service itself and what is most commonly seen. The ‘basic suite’ has 13 features listed on the Aplos’ website.  Some of the suite functions include: budget reports, a website builder, donor information management, and nonprofit financial statements.

This is an all-in-one fundraising app that makes asking for and processing donations a breeze. You can set up web pages online to take donations, as well as use one of the many fundraising tools available. The text to give platform is secure which is a big plus for getting people to donate.

Snowball offers a free version of its software which includes a donation page and analytics that let you know who your donors are. However, Snowball charges users a 2.9% as well as an additional $0.30 per transaction. For serious fundraisers, the $499/year Premium account may be well worth the investment.

This popular option lets you create specific targeted keywords that potential donors can easily text to give. Each keyword sends you to a donation microsite which you can customize to fit the style or mood of your campaign. One helpful feature is an automated receipt generator to let your donors know you appreciate their help. All of your donors information stays secure and Onecause even sends you reports so you can know who’s giving.

Onecause starts at $495 per year for its basic text to give package. You can also upgrade to $1,295 per year or $1,995 per year to further empower your campaigns.

Qgiv has one the easiest-to-use platforms available to launch your fundraising campaign. While other platforms have specific donation amount options, Qgiv lets donors give whichever amount they please. There are no limits or fees to the keywords or donations you can process once you have a subscription.

The basic package starts at $49 per month which includes standard text to give functions and donation forms you can customize. This plan also allows users to set up Facebook fundraising campaigns that work with your app. Additionally, Qgiv offers several other plans which only charge you transaction fees, or that allow peer-to-peer campaigns.

In 2008, mGive launched the text to give movement with a short advertisement during the Super Bowl. Their system made donating easier than it had ever been before. Donors simply texted the keyword for a $5, $10, or $25 donation to a number and their wireless carrier added that donation to their bills. No credit cards required.

Because mGive partners with over 70+ wireless carriers to process donations, pricing depends on what carrier you use. You can get in touch with mGive for more information.

Similar to mGive, Connect2Give makes the donation process quick and simple by letting you donate immediately. Pre-set amounts of $5, $10, or $25 are billed to each donor’s cell phone carrier, eliminating the need for typing-in credit card information. This platform also lets you communicate with your donors via text message so you can keep them updated and thank them for their donation.

Connect2Give offers two types of payment systems: prepaid and pay-as-you-go. With prepaid you receive no transaction fees as long as you pay upfront while pay-as-you-go charges a fee per donation.

Give Lively is the only free platform on this list, but just because it’s free doesn’t mean it’s less effective. The software offers all the gadgets found in other platforms such as fundraising tools, peer-to-peer workflow, and event ticketing. Likewise, donors can simply text a keyword to a short, 5-digit number and donate using Apple Pay or Google Pay, among others. There is no limit to the amount of keywords you can generate for your campaigns and events. One special feature is Give Lively’s Live Display which updates with each donation.

Founded by philanthropists who create software for nonprofits, Give Lively is completely free.

This award-winning app lets you create simple-to-use text to give features such as efficient PayPal processing. You can also send out information on your campaign to all your potential donors via text or social media. Gnosis targets smaller nonprofits earning less than $500 annually. The set-up is quick and easy and lets you start accepting donations through PayPal right away. Also, you don’t necessarily need to have a 501(c)3 as long as your intentions are not-for-profit.

GMG’s basic plan starts at $35 per month with additional plans at $50 per month and $75 per month. One popular feature is a thermometer that lets you know how you’re doing on your fundraising goals. Gnosis charges a 6% fee on all donation transactions using their processor. You also cannot surpass 250 messages during each campaign cycle or else you get slapped with a $25 fee.

With these and many more options, your text to give campaign is sure to be a success!