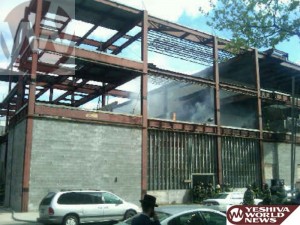 4:39PM EST: [UPDATES BELOW] The FDNY is on the scene of a fire at the Satmar Shul currently under construction on Wilson Street.

The fire is reportedly on the roof of the second floor. The building is a 50 x 150 Shul under construction. The exact address is 121 Wilson Street, at the corner of Bedford Avenue in Williamsburg.

Further details will be posted shortly.

UPDATE 4:45PM EST: The fire is on the roof of the Sukkah (bamboo roofing).

UPDATE 4:47PM EST: The fire has been placed under control. No injuries have been reported.