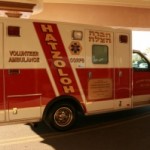 Woodmere, NY – Some Woodmere residents are fighting against the construction of an ambulance garage in their residential area.

The garage would house vehicles from Hatzalah of the Rockaways and Nassau County, an ambulance organization that serves members of the Jewish community. Neighbors say the garage would be too big for the area, cause traffic problems and drive down the value of their homes.

(YWN previously posted an article on January 28 from the Jewish Star about this.)

US Wholesale Prices Fell 0.2% In June As Food Costs Plunged