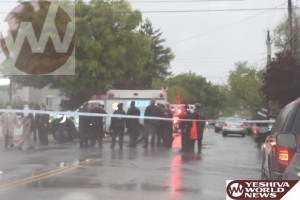 7:00PM EST: [VIDEO & UPDATE BELOW] Dozens of NYPD officers are on the scene in Marine Park, after an officer shot & killed an armed perpetrator, and a second suspect fled.

According to initial reports, officers responded to a 911 call for at Quentin Road & East 37th Street. Upon their arrival, an armed suspect fired a weapon at the officers, who returned fire. Thankfully, the officers were not injured.

Cops are searching for a second suspect, who is either barricaded inside the residence, or has fled and in in the area.

Special Units from the NYPD’s ESU, Aviation, K9, and many other units are on the scene.

A YWN reporter live on the scene tells us that the NYPD is currently entering a building in full body armor, with weapons drawn.

UPDATE 7:50PM EST: Sources tell YWN that the police had responded to the residence for a report of a “residential burglary”. Upon their arrival, one suspect pointed his weapon at the officer, who shot the suspect in the leg.

The suspect then turned the weapon on himself, and took his own life.

NYPD ESU Units have entered the residence, where they believed the second suspect was hiding (and possibly barricaded inside), but have not found him. He remains at large.

YWN VIDEO LINK: Click HERE to see footage taken on the scene by Shimon Gifter for YWN – just minutes after the shooting.

Further details will be posted as they become available to us.