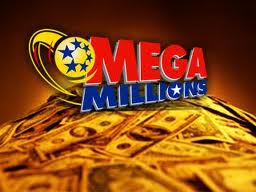 New York Lottery Director Gordon Medenica today teamed up with the Lottery’s Yolanda Vega to award a Mega Millions jackpot prize of $319,000,000 to seven coworkers from the New York Division of Housing and Community Renewal.

The lucky seven include:

“We’ve been playing the big jackpots for years,” said Mike Barth, the group member who purchased the lucky ticket on Wednesday, March 23rd at Coulsons News Center at 470 Broadway in Albany. Barth said the group’s fortune was sealed by the “fickle finger of fate.”

“I was at the counter. It was my turn to buy a ticket when I reached down to grab a Snickers® bar from the candy display and someone reached over me, actually cut in front of me to buy a ticket,” recalled Barth. “I thought about saying something but decided to just let it slide. I bought the next ticket…the winning ticket.”

Lottery millionaire John Hilton said the $319,000,000 pot was the kind of jackpot that made it worth throwing in the usual $2 per person. “We usually start playing when the jackpot hits $100,000,000,” he said, adding, “We’re pretty buttoned up. We keep a checklist of who’s in and who’s out for any particular drawing. You’ve got to.”

Gabrielle Mahar was the first of the group’s members to discover the seven had the winning combination worth $319,000,000. “I was up late reading and wanted to catch the numbers but missed them. I was dialing up the Lottery website on my phone when the numbers scrolled across the screen. I was dumbfounded.” She hesitated before calling her current (soon to be former) supervisor Kristin Baldwin. “It was late. What if it wasn’t real? I didn’t know what to do,” Mahar said.

The phone chain reached Leon Peck early the next morning. “We’re IT people. We get calls all the time about malfunctioning servers so I figured that was why my phone was ringing so early in the morning,” Peck, the usual office prankster, thought the call might be pay back for one too many wise cracks made in the office. “But, I didn’t think anyone would be calling that early on a Saturday just to play a joke on me.” Tracy Sussman said she shared Peck’s initial reaction to receiving an early Saturday morning call from a co-worker. “I got on the phone and said, ‘What’s wrong now?'”

Although Mega Millions winners have 60 days from the date they claim their prize to decide if they want to receive the annuity payment or the cash value of that annuity, the close-knit group was sure upon arriving at the Lottery’s offices that they would share the lump sum amount of $202,797,203. “We met as a group with a financial advisor the day before. We were all in agreement about the lump sum,” Baldwin said. Each group member will receive a one-time payment totaling $28,971,029 before state and federal tax withholdings. The net value of each check will total $19,129,571.

The group’s immediate plans for the money run the gamut. For Mahar, it means a new dishwasher. For Barth it’s a set of new tires and a college education for his son “not based on where he can go, but where he wants to go,” said the father of a graduating high school senior. John Hilton said he’s taking the celebrity approach to his new fortune, “I just want to fly somewhere in first class,” he said. For John Kutey, the choice is simple, “My wife and I are going to every Disney Park there is!” The others have yet to make up their minds.

New York’s sales for Mega Millions roll up that started on February 4th and culminated with the March 25th drawing totaled over $95,000,000. Sales during that time period generated $33,300,000 in profit for education.

The New York Lottery continues to be North America’s largest and most profitable Lottery, earning more than $39.3 billion in education support statewide since its founding over 40 years ago. The Lottery contributed nearly $2.67 billion in fiscal year 2009-2010 to help support education in New York State, which was over 12 percent of total state education funding to local school districts.

Lottery revenue is distributed to local school districts by the same statutory formula used to distribute other state aid to education. It takes into account both a school district’s size and its income level; larger, lower-income school districts receive proportionately larger shares of Lottery school funding.