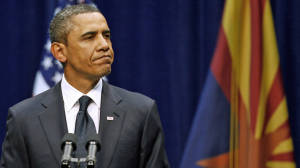 President Barack Obama, as an Illinois state senator in 2002, said that using military force to topple a murderous dictator amounted to a “dumb war” and should be opposed.

The “dumb war” Obama was criticizing was the planned invasion of Iraq and the murderous dictator was its leader, Saddam Hussein. Obama, speaking at an anti-war rally in Chicago on Oct. 2, 2002 said that while Saddam was a brutal tyrant, that was not enough to justify using military force to remove him from power.

“Now, let me be clear – I suffer no illusions about Saddam Hussein,” said Obama in his speech. “He is a brutal man. A ruthless man. A man who butchers his own people to secure his own power. He has repeatedly defied U.N. resolutions, thwarted U.N. inspection teams, developed chemical and biological weapons, and coveted nuclear capacity. He’s a bad guy. The world, and the Iraqi people, would be better off without him.”

“… After September 11th, after witnessing the carnage and destruction, the dust and the tears, I supported this administration’s pledge to hunt down and root out those who would slaughter innocents in the name of intolerance, and I would willingly take up arms myself to prevent such tragedy from happening again,” said Obama. “I don’t oppose all wars.  … What I am opposed to is a dumb war. What I am opposed to is a rash war. What I am opposed to is the cynical attempt by Richard Perle and Paul Wolfowitz and other armchair, weekend warriors in this administration to shove their own ideological agendas down our throats, irrespective of the costs in lives lost and in hardships borne.”

Obama argued that deposing Saddam militarily was not necessary, because Iraq posed no “direct threat” to the United States. Obama also cited Iraq’s weakened economy and the fact that it was still possible to contain Saddam’s aggression, repudiating the Bush administration’s rationale that Saddam posed too great a threat to American interests and his own people to be left in power.

“But I also know that Saddam poses no imminent and direct threat to the United States, or to his neighbors, that the Iraqi economy is in shambles, that the Iraqi military is a fraction of its former strength, and that in concert with the international community he can be contained until, in the way of all petty dictators, he falls away into the dustbin of history,” said Sen. Obama.

However, as president of the United States, Obama has discounted those same arguments he once made against using military force against brutal dictators.

In his March 28, 2011 speech justifying his decision to attack the government of Libyan leader Moammar Gadhafi, Obama cited Gadhafi’s record of brutality, saying that allowing Gadhafi to continue his brutality was not an option.

“Qaddafi declared he would show ‘no mercy’ to his own people,” said President Obama.  “He compared them to rats, and threatened to go door to door to inflict punishment. In the past, we have seen him hang civilians in the streets, and kill over a thousand people in a single day.

“Now we saw regime forces on the outskirts of the city,” Obama said. “We knew that if we waited, if we waited one more day, Benghazi, a city nearly the size of Charlotte, could suffer a massacre that would have reverberated across the region and stained the conscience of the world.”

Gadhafi, apparently unlike Saddam, needed to be stopped because he would kill his own people to maintain his own power, an act that this time posed a threat to America’s “interests and values,” Obama said.

“But when our interests and values are at stake, we have a responsibility to act,” said Obama. “That’s what happened in Libya over the course of these last six weeks.”

Obama, in his 2002 speech, said that instead of deposing Saddam through force, America should “fight” for democratic reforms in countries such as Saudi Arabia and Egypt, stronger international nuclear safeguards, and energy independence.

By 2011, however, Obama had come to endorse the use of military power to enforce America’s “responsibility as a [global] leader” arguing that the United States was “different” and therefore had no other choice but to attack Libya.

“To brush aside America’s responsibility as a leader and, more profoundly, our responsibilities to our fellow human beings under such circumstances would have been a betrayal of who we are,” he said. “Some nations may be able to turn a blind eye to atrocities in other countries. The United States of America is different.”