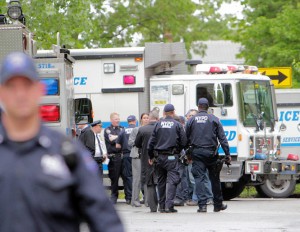 Staten Island – Multiple people have been shot – least two fatally – in the Huguenot section of Staten Island, and Misaskim is on the scene.

Although details are still sketchy, sources tell YWN that the NYPD was dispatched to 115 Collyer Avenue to investigate a reports of a shooting. Upon their arrival they learned that a husband and wife were shot, and the suspect had barricaded himself inside the home.

The NY Times reported the following:

Paul J. Browne, the Police Department’s chief spokesman, said that based on preliminary information, someone called 911 to report a “push-in” robbery of a woman in her home, Mr. Browne said. During that encounter, the woman was shot in the abdomen, he said. She was later taken to the hospital; she is expected to live, he said.

Officers who responded to the call for help “observed that the assailant was still inside the apartment,” said Mr. Browne. Those officers radioed for backup from the Emergency Service Unit, he said.

The man was shot and killed in a confrontation with the responding Emergency Service Unit officers, Mr. Browne said. It was not immediately clear if the suspect knew the woman.

Investigators later said that they believed the assailant shot two people — the woman and her husband — and that they were his former employers, Mr. Browne said.

It is not clear what type of work the assailant did for the victims or when he stopped working for them, Mr. Browne said.

But, after the man pushed his way into their home, he shot his “former boss in the head and shot the boss’s wife when she tried to intervene,” Mr. Browne said.

The man and woman were taken to Staten Island University Hospital. The man was in critical condition, Mr. Browne said, and his wife was in stable condition.

Mr. Browne provided more details about what had precipitated the shooting.

He said that when the Emergency Service Unit officers entered the home, they searched for the assailant. They found him armed and standing in a closet.

“He initially pointed the gun at his head and then turned and pointed it at the Emergency Service Unit officers,” Mr. Browne said. “And he refused repeated commands to drop the gun.”

The man was then shot and killed by the police.

It was not immediately clear if more than one officer opened fire and how many bullets were discharged, Mr. Browne said.