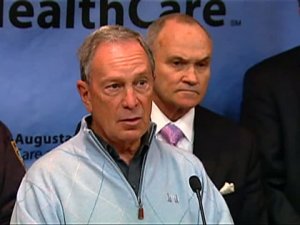 NYC Mayor Michael Bloomberg is again ramping up his crusade against illegal guns after authorities say four NYPD cops were injured during a shootout in Brooklyn.

Two of the officers are still at Lutheran Medical Center in stable condition.

Police say the alleged shooter, 33-year-old Nakwon Foxworth, had a small arsenal of illegal weapons inside his apartment when he got into an argument with moving company employees in front of a Sheepshead Bay apartment building on Nostrand Avenue Saturday night.

Police say the movers called 911 after Foxworth allegedly threatened them with a gun. That’s when authorities say Foxworth retreated to his sixth floor apartment and barricaded himself with his pregnant girlfriend and 4-month-old baby inside.

When officers arrived, police say they got the woman and infant out and moved in. That’s when authorities say Foxworth opened fire, shooting 12 times and wounding four officers.

Cops fired back, hitting Foxworth in the abdomen.

“The gunfight occurred in close quarters with the assailant and the officers no more than 10 feet apart,” said Kelly.

Bloomberg spoke out about this latest incident at a news conference Sunday, noting that eight members of the NYPD have been shot in the last four months.

“We will continue to do whatever we can to take illegal weapons off our streets, but until Congress takes some action to stand up to the gun lobby, illegal guns will continue to wind up in the hands of people like tonight’s shooter,” Bloomberg said. “It could have been a great tragedy.”

Foxworth has been charged with attempted murder, assault on a police officer, criminal possession of a weapon and menacing.