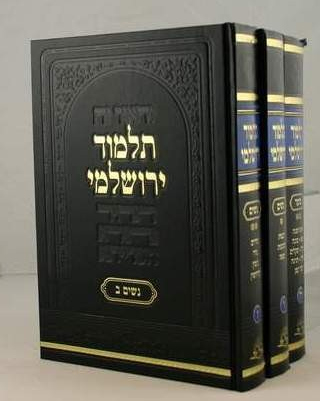 This article is dedicated in memory of the author’s father, Dr. Nathan Hoffman z”l, whose yartzeit is today. Dr. Hoffman was in Eretz Yisroel during the Six Day War, and was one of the first to enter the reclaimed buildings that were lost in 1948. He vividly describes the scenario in a letter he had written to the author’s grandfather.

It was the very first Talmud. It was the product of the scholarship of the great Rabbis that were left in Eretz Yisroel. And the Rabbis of Eretz Yisroel studied it under great mesiras nefesh – under the tyranny of the newly converted Roman Empire, and then the oppression of the Byzantine Empire.

Some questions, however, arise at the outset.

Why was it called the Talmud Yerushalmi? Didn’t the Romans forbid Jewish residence in Yerushalayim? Didn’t Hadrian rename the city Aelia Capitolina and have the tenth legion stationed there to prevent any Jews returning? Who compiled the Yerushalmi and when did he do so?

The answer to the first question is yes, it is true. The studying did not take place in Yerushalayim. Nor did the Rabbis live there. The majority of its formulation was done in the Yeshivos in Tveria. Why then is it called the Talmud Yerushalmi? One answer is that all of Eretz Yisroel is called Yerushalayim.

Perhaps, however, there is another answer. Perhaps we did not wish to forget Yerushalayim – notwithstanding the harsh and evil decrees of Hadrian. Perhaps Dovid HaMelech’s words were on their mind, when he said, “im yishkachaich yerushalayim tishkach yemini – If I forget thee oh Yerushalayim – let might right hand be forgotten.” This was perhaps a means of remembering it.

WHEN WAS IT COMPILED?

When was the Yerushalmi compiled? Opinions in the Rishonim range over a full century. The Meiri writes (introduction to Pirkei Avos) that it was 180 years after the destruction of the second Beis HaMikdash – in the year 250 CE. Raavad I places it at 270 CE. While the Rambam and Raavad III place its compilation at 370 CE.

Some even question whether it was ever redacted at all. Rav Yitzchok Isaac HaLevi Rabinowitz, author of the Doros HaRishonim (6:19) writes that, unlike the Bavli, the Yerushalmi was never redacted at all, it was just placed together. Thus it retains numerous internal contradictions from one tractate to another and sometimes within the very same tractate – because it was only a compilation of the various conversations that occurred in the different Yeshivos. Others say that portions of the Yerushalmi were redacted, while others were not.
We must also recall that the Talmud Bavli was written under the Sassanian Persians, who by and large were very supportive of their Jews. Not so the Romans and Byzantines. They placed so much tyranny and oppression over their Jews that it was difficult for the Yeshivos to function.

DID THEY FOCUS ON NEZIKIN?

Which brings us to the different sections of the Yerushalmi itself. In modern times, the Yeshiva world focuses more on the study of Nashim and Nezikin. Did they do so back then too?
If we compare the relative size of the tractates between the Bavli and the Yerushalmi, as a general rule, we will find that the Yerushalmi tractate is about 2/3rds the size of its Bavli counterpart. Not so with Nezikin. Nezikin is only 1/3rd. At first glance it would seem that they focused less on Nezikin.

But perhaps not. Some theorize that the material was once more abundant, but was somehow lost. I question this theory, however, because it does not seem to be missing in the manner of lost material. It might be better to look for a different explanation. There are more pilpulim in the Nezikin section of the Yerushalmi than in the other sections. The names of the Amoraim are different too. And less of the later Amoraim. Perhaps all this points to the possibility that the Nezikin section was redacted and compiled earlier. Earlier, and elsewhere. Caesaria is one possibility, while the rest was done in Tveria.

What about Kodshim? Many top Yeshivos now in Eretz Yisroel focus on Kodshim. Did they do so then? There is no Yerushalmi on Kodshim, although I own a copy of a forged Yerushalmi published in 1902 by Friedlander. The forgery even fooled the great Maharsham. The Maharsham’s commentary on the Yerushalmi on Chulin and Zvachim was printed in the back of the volume. He did so in exchange for copies of this Yerushalmi.

DIFFERENCES BETWEEN YERUSHALMI AND BAVLI

There are numerous differences between the two Talmuds, some in style and some in Halacha. Some of these debates can be quite fascinating.

With Rosh HaShana coming up, many of us remember being taught that if Rosh haShana falls on Shabbos we do not blow the shofar, because the Rabbis were concerned that we might come to carry it in order to receive instruction. According to the Yerushalmi (Rosh HaShana 4:1), it is a Torah law that we do not blow shofar on Shabbos – not a Rabbinic one.

In Brachos (6:8) the Yerushalmi has a special blessing recited upon medicines (Boruch shebara mei refuos). The Bavli only mandates blessings on items with hanaah – pleasure.
It is often said that Israelis are more blunt than Americans. Was this true of the Rabbis in the Yerushalmi? In Psachim 10:4 we find the four sons of the Hagaddah. Both Talmuds have the Chochom, the Rasha, and the one who does not know how to ask. The Bavli has the innocent son called “Tam.” The Yerushalmi labels him as “Tipesh” – stupid.

The differences between the Yerushalmi and the Bavli are quite fascinating, and now that Artscroll is producing volumes of the Yerushalmi at a rapid pace – the field has been opened up for everyone to explore. In a few years we will possibly merit discussions of these differences in shuls across the world – just like the study of Daf Yomi has been opened up. Hopefully, this is a portend for the arrival of the geulah bimheira b’yameinu! Amain!