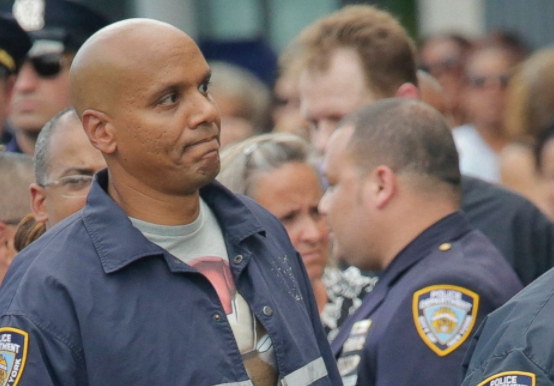 President Donald Trump piled on to the backlash Monday against New York City Mayor Bill de Blasio, who spent the weekend with world leaders in Germany as his city grappled with a police officer’s killing.

Trump shared with his 33 million Twitter followers a Fox News story about a police official slamming “de Blasio for skipping vigil for assassinated cop.” The Republican president tweeted the link just a few hours before the Democratic mayor met with the family of Officer Miosotis Familia, who was shot to death on Wednesday while sitting inside her police vehicle.

De Blasio also promised to attend Monday evening’s wake, which he did, and Tuesday’s funeral. But the mayor’s critics — those in the GOP, the police department and the media — say this week’s show of support is too little too late. They note that he left the city one day after the fatal shooting, skipping a swearing-in ceremony for hundreds of new police officers and a weekend vigil for Familia.

“There are a lot of quality-of-life issues in New York City that have deteriorated and are going unaddressed while this mayor is off fighting a national or international ideological war,” Malliotakis said. “He is really taking New Yorkers for granted.”

That was mild compared to the headlines de Blasio faced over the weekend on the New York Post, which frequently attacks the mayor. One read : “And Don’t Come Back!”

De Blasio spokesman Eric Phillips said the mayor agreed to attend the Group of 20 summit in Hamburg, Germany, this weekend only after determining he would return in time for Familia’s funeral. De Blasio felt it was important to appear in Germany “to provide an alternate American viewpoint” to push back against Trump.

While there, Phillips said, de Blasio met with the Hamburg mayor, members of the Hamburg parliament and promised to fight against racism and xenophobia in a speech to protesters.

De Blasio has long fancied himself a player in national politics, even if he remains largely unknown beyond New York.

His relationship with own police force has been strained for years.

In 2014, thousands of city police officers turned their backs on the mayor as he eulogized two officers shot. Police union leaders blamed de Blasio for helping to create an environment that allowed the killings after he supported protests following the deaths of young black men across the city.

“This trip to Germany was a dumb idea,” said Maurice Carroll, assistant director of the Quinnipiac University Poll. “There was no need for it. He’s got a cop killed in a particularly cold-blooded and nasty way. So why not stick around?”

It’s unclear, however, if de Blasio will pay a serious political price. A Quinnipiac poll found in May that 60 percent of New Yorkers approved of the mayor’s job performance. And the strongest would-be challengers opted not to run against him in his first re-election test on Nov. 7.

“He’s very vulnerable. There’s just nobody to take advantage of it,” Carroll said.

Ed Mullins, head of the Sergeants Benevolent Association, lashed out at de Blasio in the Fox News clip that Trump tweeted, which quoted Mullins from a radio interview saying, “We have a very anti-police atmosphere. … The police are not your enemy.”

At Monday’s wake, Police Benevolent Association President Patrick Lynch said: “The mayor’s office and the mayor are supposed to be the compass for this city. His compass is off. His compass led him to Germany.”