(SEE UPDATES AT THE END OF THE ARTICLE)

Houston has always had a limited amount of kosher food.

Even as its Jewish population has rapidly grown in recent years, as has the general population, it remains geographically distant from kosher manufacturing bases on the coasts and the heartland. Each week, trucks carrying kosher food arrive from hundreds if not thousands of miles away. A handful of chain supermarkets, such as H-E-B Grocery, carry kosher meat, poultry and milk to supply Houston’s Jewish community. Hurricane Harvey flooded two of these main supermarkets and caused the other two to shut down as well—one has been turned into a shelter by authorities—and supplies are now beginning to run low.

“We have placed an order for kosher meat in Miami, and it’s leaving there on a refrigerated truck Tuesday morning, heading this way,” Rabbi Dovid Goldstein, a Chabad-Lubavitch emissary in Houston who is coordinating the kosher food-relief effort for the community, told Chabad.org. Chabad-Lubavitch of Texas Regional Headquarters plans to make a kosher food pantry available to the Jewish community as supplies reach the area.

They can only do that, however, if the roads are cleared of water.

“Even for those who were fortunate not to lose electricity, like us, it’s a matter of days until we have no milk and other basics,” says Rabbi Yossi Zaklikofsky, a Chabad emissary whose own home was flooded and serves as leader of the Shul of Bellaire. He added that many of those who did lose their electricity lost whatever kosher food they had stockpiled. “And when the stores do reopen, it is open question as to what they’ll actually have that’s salvageable.”

For now, basic staples like rice and cereal are available in unflooded grocery stores. But thousands of people in Houston are still sheltering in place, and when that order is lifted, food supplies will inevitably plummet.

Pinny Bard-Widgor moved to Houston from New York just last week with his wife and children. As weather reports poured in prior to Shabbat, Bard-Widgor decided to take his family to Fort Worth, a five-hour drive away. Local friends told him that he was overreacting. He still doesn’t know the extent of damage to his new home.

With his family safe in Fort Worth, Bard-Widgor flew to New York on Sunday evening for work, and is now helping Goldstein coordinate a kosher-food shipment from Brooklyn.

“We’re working on getting a truck of perishables and another of nonperishables,” says Bard-Widgor, though he was still having difficulty getting hold of a refrigerated truck. Goldstein reports that food shipments are being arranged from Dallas as well.

In addition to supermarkets and kosher restaurants (all of which have also been flooded), a number of Jewish families in the Houston area order kosher food via a co-op, meaning that together they place a bulk order every three months. They then store the food in a large freezer. The next order was set to arrive on Sept. 4; as of now, it doesn’t look like it will make it. All of this is taking place with Rosh Hashanah and the High Holidays fast approaching.

“If we don’t get food down here this will become a big problem fast,” Zaklikofsky tells Chabad.org. “Are we surviving? Yes, for now.”

UPDATES: A reader from Houston informs YWN that Kosher food is available at Beldens Food Market, at this time. Kosherama is expecting a new shipment on Thursday.

The Jewish Learning Center of Dallas is sending meals to storm-affected areas, and will also be hosting many people for this coming Shabbos. 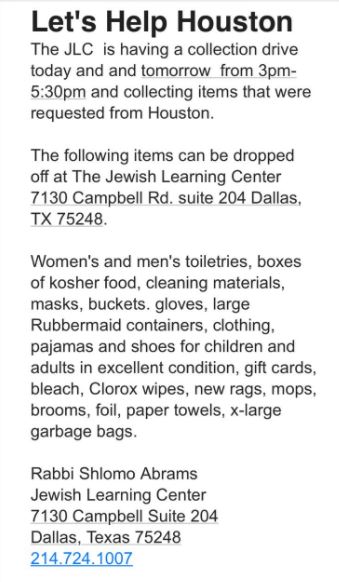 TO ASSIST with storm recovery efforts, CLICK HERE to DONATE to the hurricane relief fund.