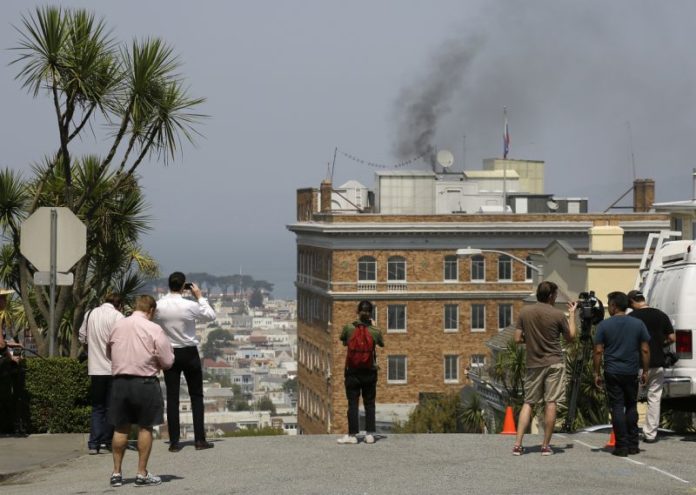 The United States seized control Saturday of three Russian diplomatic posts in the U.S. after confirming the Russians had complied with the Trump administration’s order to get out within two days, officials said.

As the Kremlin cried foul, accusing Washington of bullying tactics, the U.S. disputed Moscow’s claims that American officials had threatened to “break down the entrance door” to one of the facilities, and that the FBI was “clearing the premises.” Not true, said a senior State Department official, adding that U.S. officials had joined Russian Embassy personnel for walkthroughs of the three buildings.

“These inspections were carried out to secure and protect the facilities and to confirm the Russian government had vacated the premises,” the official said in a statement emailed Saturday to reporters by the State Department on condition the official not be named.

Russia has been incensed by the move to shutter Russia’s consulate in San Francisco and trade offices in Washington and New York, actions the U.S. took in retaliation for Moscow’s decision last month to force the U.S. to cut its diplomatic personnel in Russia to 455. Moscow has accused the U.S. of violating international law by shuttering the facilities, a charge the U.S. disputes.

The Foreign Ministry also posted video on Facebook that it said showed FBI agents inspecting the consulate general building in San Francisco. In the video, a man in a tie knocks on several numbered doors and enters what appears to be apartment units, taking a quick glance inside before declaring everything in order.

There was no additional comment from the U.S. about whether the FBI was involved in the inspections. The State Department declined to answer additional questions about whether the premises might be searched for intelligence-gathering purposes now that the Russians have left.

A day earlier, black smoke was seen billowing from the chimney at the consulate as the Russians rushed to meet the Saturday deadline, and workers could be seen hauling boxes out of the stately building.

The U.S. did appear to bow to one Russian complaint — that they were given a mere 48 hours to vacate homes used by diplomats and their families. Softening the original order, the U.S. said it had made “separate arrangements” to give families “sufficient time” to pack their belongings and vacate apartments on the consulate grounds.

The U.S. wouldn’t disclose how long the Russians would have to move out of the residential part of the consulate, other than to say that Moscow had been informed of the new deadline. In the meantime, the State Department will control all access to the properties, along with the responsibility for securing and maintaining them, the official said.

The closures on both U.S. coasts mark perhaps the most drastic diplomatic measure by the United States against Russia since 1986, near the end of the Cold War, when the nuclear-armed powers expelled dozens of each other’s diplomats.

And it comes amid some of the broadest strains in their relationship ever since. The two countries have clashed over the wars in Ukraine and Syria, but most significantly over American allegations that Russia meddled in the 2016 U.S. election to boost President Donald Trump’s chances of victory. Investigations continue into whether Trump’s campaign colluded with Moscow.