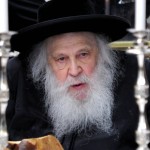 The Shomrei Emunim Rebbe, Rav Avrohom Chaim Rotter ZT”L ZY”A was niftar during the night, at about 23:55. The rebbe went into cardiac arrest on isru chag Shavuos, and was admitted to Jerusalem’s Bikur Cholim Hospital after successful resuscitation. When the rebbe’s condition improved, he was moved to Sheba Medical Center at Tel Hashomer in Tel Aviv.

Over recent days, the rebbe’s condition deteriorated. The levaya is set to begin at the Shomrei Emunim Beis Medrash in Bnei Brak at 11:00. From there the levaya will travel to the beis medrash in Yerushalayim, Meah Shearim at 13:30, and from there to Har HaZeisim. The rebbe was 89. He will be buried alongside his father the Bal Shomrei Emunim.