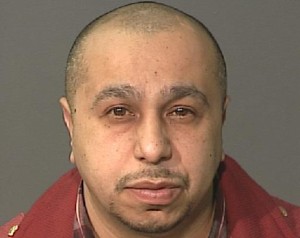 The hit-and-run ex-con charged with mowing down a young Orthodox Jewish couple in New York last month, killing them and their unborn child, said “accidents happen,” in his first remarks about that death-filled day.

Julio Acevedo, 44, told WABC in a jailhouse interview he was deeply sorry, but insisted he was not speeding down a Brooklyn street, as alleged — and that the cabbie ferrying Nachman Glauber and his pregnant wife Raizy Glauber on March 3 ran a stop sign and thus deserves an equal measure of fault in the tragedy.

“I can’t bring ’em back; it was an accident,” Julio Acevedo reportedly said, “I apologize deeply.”

“I’m made out to be the monster in all this . . . Sure I played a part. I couldn’t stop. Accidents happen. I’m sad. It was a tragedy. Let’s ask the cab driver why did he run the stop sign.”

WABC inquired of Acevedo whether he was certain the livery hack ran a stop sign before he T-boned the vehicle and caused the three fatalities.

“Positive,” Acevedo replied. “Of course (he bears responsibility). He was more in the rush than I was. He was rushing the woman to the hospital.”

Acevedo, who fled, was arrested four days later in Pennsylvania.

He is being held without bail on three counts of vehicular manslaughter – due to prosecutors’ allegations, based on witness accounts, that he accelerated to nearly 70 mph, twice the speed limit, and was swerving through traffic in the moments before the accident occurred in the Williamsburg section of the borough. He faces life in prison.

Acevedo, who previously served 10 years on a murder rap, insists that he would not have callously fled the scene, if he could replay the events of that day. “Now knowing what I’m going through, I would have stayed,” Acevedo told WABC.