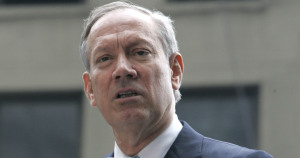 An animated former New York Gov. George Pataki shook his head repeatedly as he was accused at a civil trial of abusing his power by ordering prisoners moved to psychiatric facilities without hearings.

Pataki made clear through his expressions Tuesday that he disagreed with lawyers for six men who claimed in a lawsuit that their rights were violated by Pataki. Pataki nodded his head as his lawyer insisted that he acted honorably during opening statements.

The lawsuit arose after Pataki announced in October 2005 that every sexually violent predator would be evaluated for involuntary civil commitment once that person was released from prison.

A lawyer for the state said the inmates ended up where they belonged and no harm occurred. Pataki will testify later in the trial.