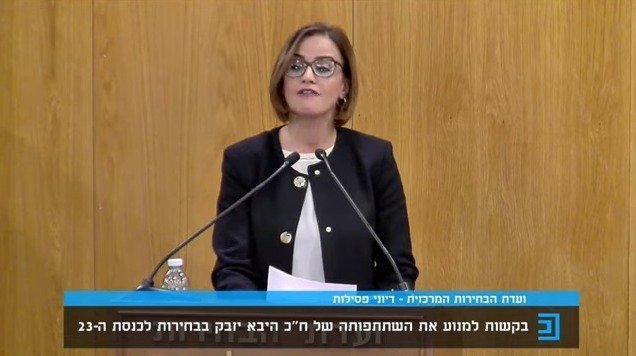 The Central Elections Committee voted on Wednesday to disqualify Arab Joint Arab List MK Heba Yazbak for running in the upcoming elections due to her public statements supporting terrorism against Israel.

Degel HaTorah joined Agudas Yisrael, Shas, the other right-wing parties, Blue & White and some members of the Labor-Gesher merger in voting for Yazbak’s disqualification after being instructed to do so by Gedolei Yisrael on Tuesday night. The vote to disqualify Yazbak was 27-7, with only Meretz and the Joint Arab List opposing the move.

Degel HaTorah chairman MK Moshe Gafni visited the homes of Hagaon Harav Chaim Kanievsky and Hagaon Harav Gershon Edelstein on Tuesday night to hear their final decision on whether to vote for the disqualification of Yazbak.

The decision of the Gedolei Yisrael was partially based on the precedent set by Hagaon Harav Aryeh Leib Shteinman, z’tl, who instructed Degel HaTorah in the past to vote for disqualifying Balad MK Haneen Zoavi from the Knesset due the fact that “she speaks against Am Yisrael to the world.”

Chairman of Otzma Yehudit, Attorney Itamar Ben-Gvir, delivered a strongly-worded speech to the committee before the vote: “I’m standing before you…but I’m not standing here alone. At this moment, millions of prosecutors – citizens of Israel are standing with me – and thousands of victims who were murdered in acts of terror in the fight against the state of Israel. Danny Haran stands here today, whom the lowly terrorist Samir Kuntar shot in the back in front of his little daughter, Einat Haran, who was killed by that murderer by smashing her head on a rock.”

Attorney-General Avichai Mandelblit issued his opinion prior to the Central Election Committee meeting that although he condemns Yazbak, there is not enough evidence that she was calling for attacks against Israel to disqualify her although she came very close to that line. The final decision will be made by the Supreme Court.

As YWN reported last week, A petition was filed by Likud MK Ofir Katz to the Central Elections Committee to disqualify Yazbak in light of her public statements supporting terrorists, including Samir Kuntar, who killed a four-year-old girl in Nahariya in 1979 by smashing her head on rocks after shooting her father, Danny Haran, in front of her.

Degel H’Torah wanted to vote for Yazbak’s disqualification for the same reasons the other parties wished to vote for it. But on the other hand, voting for her disqualification meant alienating Joint List chairman Ahmad Tibi and currently, Finance Committee chairman Moshe Gafni and Tibi, who is on the Finance Committee, cooperate on many issues of joint interest. Tibi has already announced that if Blue and White votes for Yazbak’s disqualification, it ends their chance of any potential agreement with the Joint List.

Since there is already a majority who will vote for Yazbak’s disqualification, Degel H’Torah’s vote won’t affect the decision but on the other hand, refraining from disqualifying someone who openly supports terror could cause a chillul Hashem and also alienate potential Dati Leumi voters, some of whom have been voting for Yahadus H’Torah due to the recent constant changes and splits in the Dati Leumi parties.