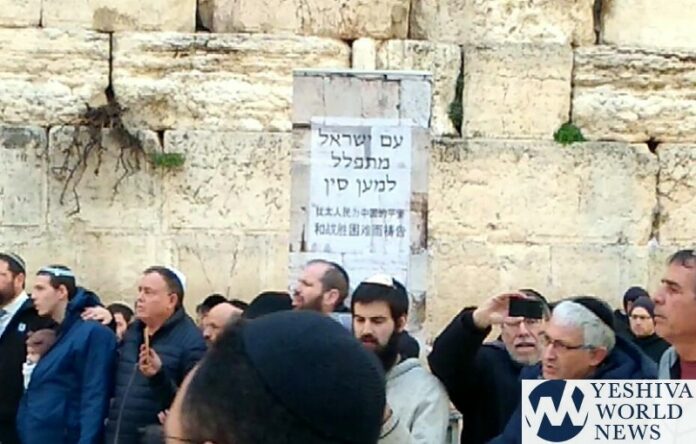 Itzik, known in Israel as “Itzik HaSini” (Chinese Itzik) is a Chinese citizen living in Beijing who speaks fluent Hebrew and works for the China Radio International (CRI) in the Hebrew department and also teaches Hebrew at a university.

Recently Itzik posted a video on his YouTube channel telling viewers how people in China responded to the tefillah at the Kosel for the coronavirus crisis. He showed how the video of the tefillah was posted on various Chinese websites. On one website the post about the tefillah received 634,187 likes and over 18,000 responses.

“During World War II, we extended only a bit of help to the Jews,” one viewer wrote. “We never thought that our friends the Jews would remember it so much and care so much about us.”

Another viewer wrote that she had just had a fight with her family members and the moment she saw the video, she couldn’t control her emotions and she cried.

“I want to thank Israel with all our heart for the prayers and blessings,” another viewer wrote. “I hope that Israel will have peace for a long time.”

Another person was curious about various aspects of the tefillah and asked two questions: “What happens to the notes that people put in the Kosel? Do they get cleaned out eventually? Does the Rabbi wears a kippah only while he prays or he wears it all the time?”

“People in Shanghai thank you and respect you for your good deed,” a man from Shanghai wrote.

How does “Chinese Itzik” know fluent Hebrew? Itzik explained the answer to that question in another video on his channel.

In 2005, when Itzik was 18 and was applying to a Chinese university, he had never even heard of Hebrew or Israel. Itzik, who is obviously very intelligent since he received the highest mark in his region and was accepted to the university of his choice, needed to decide which language he would study in the university.

Itzik wanted to choose something different than the typical French, German or Spanish and he saw that the university offered Ivrit. His grandfather told him that “Hebrew is the holy language of the Jews. Their land is called Israel. The Jews are a very intelligent nation and are very creative. If you study Hebrew you’ll have what to do with your life.”

He learned Hebrew for two years at the Chinese university and then traveled to Israel to study Hebrew for another year. Currently, he lives in Beijing, is married and has proven his grandfather right- he makes his living through his fluent Hebrew.