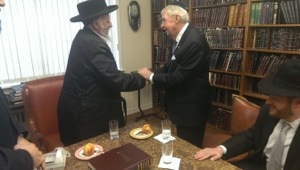 While the race for mayor has remained pretty competitive and unpredictable, the race for Brooklyn District Attorney is heating up especially in terms of outreach in the Orthodox Jewish community. As the only incumbent Brooklyn candidate in this year’s election, Charles “Joe” Hynes’ path to success in his reelection bid may be determined by his ability to remind the frum community of the strong relationship he has had with this group of Jewish voters over the last two decades.

This week, District Attorney Hynes visited prominent Rabbonim in the Orthodox Jewish community to receive a bracha and wish the community a happy new year ahead of Rosh Hashanah.

District Attorney Hynes was warmly welcomed and greatly lauded for keeping Brooklyn safe and for fairly treating the community, in his years as District Attorney. According to sources who have spoken to YWN, Mr. Hynes walked away with blessings and an expression of support of his candidacy from every single Rov he visited.

According to sources who were present at the 45 minute-long meeting with the Satmar Rebbe, in Williamsburg, Mr. Hynes spoke about the programs he had put in place to keep the neighborhoods in Brooklyn safe and the relationships he has managed to maintain over the years. The Rebbe thanked Mr. Hynes for always having an open door for the Jewish community, focusing on the future rather than the past.

In all of his meetings in the community, Mr. Hynes was warmly greeted, with some of the rabbis expressing their great concern about who his opponent is affiliated and some of the negative comments his opponent has made about the Orthodox Jewish community. “At least with you, while we disagree on some issues, we always know that you have an open door and a willingness to listen to us,” one of the Rabbonim told Mr. Hynes.

As for the ‘mafia’ comment, while the issue was not raised during his meeting with the Satmar Rebbe, Mr. Hynes did, in fact, apologize publicly for his previous comment in which he called some in the Orthodox Jewish community – ‘Mafia’.

“That was not only a wrong thing to say, an unfortunate thing to say, it was an insensitive thing to say,” Mr. Hynes admitted in an interview with Hamodia. “Now, ordinarily, I’m pretty sensitive. And what I said was insensitive, and I’ve apologized. I had a group of my friends in Williamsburg recently and I apologized to them. And I apologize to your readership. I should not have said that.”