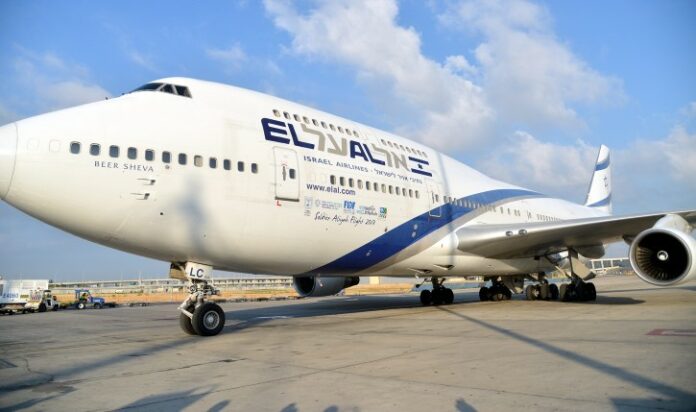 El Al is grounding all flights to and from Israel on Thursday at midnight amidst a dire financial crisis in the wake of the lack of demand due to the global coronavirus pandemic.

Israel’s national airline has dwindled to its current ten flights a day to New York, Toronto, London and Paris.

El Al stated that it will continue to operate cargo flights as well as flights to repatriate Israeli stranded overseas.

The move means that more employees will be placed on unpaid leave, joining the 5,500 employees who have already been laid off.

An El Al plane took off from Bogata, Columbia on Wednesday night, bringing back 70 Israelis to Israel. The flight was arranged in cooperation with the Foreign Ministry after Columbia shut its borders.

Another flight brought back Israelis from Buenos Aires, Argentina. Other South American countries including Brazil, Chile, and Peru have also announced border closures and it is believed that thousands of Israelis are still stranded there.

Earlier this week, in the first-ever direct flight to Australia, El Al flew to the continent down under to repatriate 250 Israeli from Perth, including 80 who had been in New Zealand. The flight, which took 17 hours, landed in Perth on Tuesday morning and took off several hours later. The flight required hours of work by Israeli diplomats in Canberra and Wellington, including special permission for the Israelis in New Zealand to enter Australia without appropriate visas.

As the first direct flight from Israel to Australia leaves Perth,we are proud to have brought home over 100 Aus. citizens and to return to Israel over 250 Israelis. A major operation of Israel's Foreign Ministry and El Al with amazing cooperation from all Australian authorities pic.twitter.com/QNm4iNXEJI

About 250 Israeli returned to Israel from Budapest, Hungary on a special Israir Airlines flight this week.

Frantic efforts are also being made to rescue thousands of Israelis still in India, who has also closed its borders.

Israel has also arranged flights to rescue Israelis from Ghana, Bolivia, Croatia, Jordan and other locations around the world.

Reading the paper this morning and most of it with sad #CoronaVirusUpdates.
But was glad to see this red square saying: “Thank you ❤️ @EL_AL_ISRAEL, @IsraelMFA and all involved with getting our loved ones back from Peru”. pic.twitter.com/0pZcbf43P6