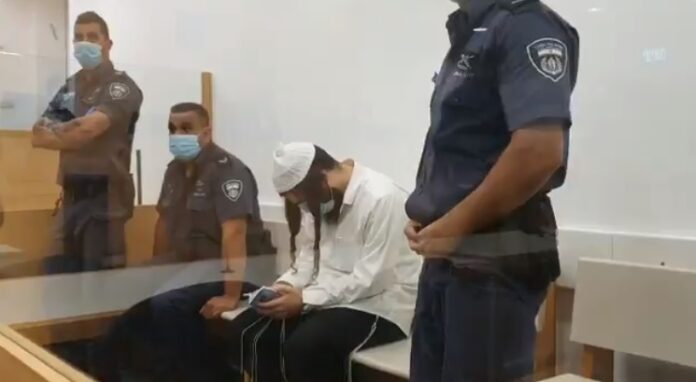 The Lod District Court on Monday convicted Amiram Ben-Uliel of three counts of murder in a 2015 arson attack in the Arab village of Kfar Duma, which killed three members of the Dawabsha family, including a toddler.

The court ruled that Ben-Uliel, 25, a resident of the Shomron, hurled firebombs late into the Dawabsha home in July 2015 as the family slept, killing 18-month-old Ali Dawabsheh. His mother, Riham, and father, Saad, later died of their wounds. Ali’s 4-year-old brother Ahmad survived.

Ben-Uliel’s lawyers said they are appealing the verdict to the Supreme Court, explaining that the court had wrongfully accepted confessions extracted during torture.

“This is a dark day for the state of Israel,” Shmuel Zangi Meidad, director of the Honenu legal foundation and one of Ben-Uliel’s lawyers, said.

“This judgment is worthy of the third world and of regimes…of 100 years ago. Today an Israeli court lent a hand to convict a man whose innocence cries to the heavens.”

“We believed that the State of Israel values human rights, that a citizen who’s been tortured in the harshest ways in the cellars of the Shin Bet until he was forced to confess for a crime he didn’t do would not be convicted on the basis of such admissions.”

“This trial won’t bring my family back,” Hussein Dawabsheh, the toddler’s grandfather, said outside the courtroom in central Israel. “But I don’t want another family to go through the trauma that I have.”

The attack was condemned across the Israeli political spectrum, and Prime Minister Binyamin Netanyahu pledged “zero tolerance” in the fight to bring the assailants to justice. Investigators placed several suspects under “administrative detention,” a measure typically reserved for Arab terrorists that allows authorities to hold suspects for months without charge.

“This was an attack with racist motives,” said prosecutor Yael Atzmon. “The court ruled it as a terrorist attack and this sends an important message that terror is terror and the identity of the perpetrators is irrelevant.”

Critics, however, noted that lesser non-deadly attacks, such as firebombings that damaged mosques and churches, had gone unpunished for years

Ben-Uliel was also convicted of two counts of attempted murder and one count of arson but was acquitted on the charge of belonging to a terrorist organization.

An accessory to the crime, a minor, signed a plea bargain with prosecutors admitting to conspiring with Ben-Uliel in planning the arson attack and to three counts of vandalism. The plea bargain deal was also criticized for being based on a confession extracted during torture.

October 26, 2020 1:57 pm
21
Once again, the NYC Health Department has been caught red-handed, writing a summonses to a totally empty Yeshiva building. In the video below, the viewer...