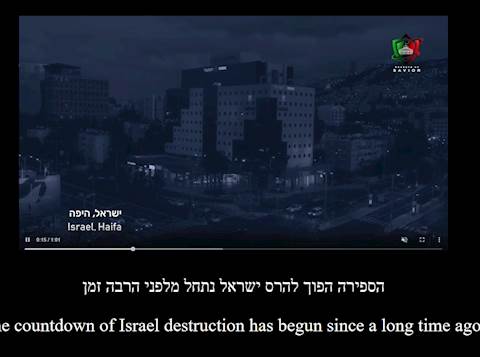 Hundreds if not thousands of Israeli websites were hacked in a cyberattack on Thursday, the National Cyber Directorate stated.

The websites’ homepages were replaced with an anti-Israel video and the ominous (but poorly translated) message of: “The countdown of Israel destruction has begun since a long time ago,” in Hebrew and English.

The anti-Israel video was also uploaded to YouTube with the statement: “An universal mission completed. It is done in order to support resistance and freedom of palestine.”

“Hackers_Of_Savior” was named on the bottom of the page as the group responsible for the attack.

The National Cyber Directorate said that it warned last week that Iran may perpetuate a cyberattack to mark al-Quds Day.

Quds Day (Jerusalem Day as Quds is the Arabic name for Jerusalem), held every year on the last Friday of Ramadan, was initiated by Iran upon the establishment of the Islamic Republic of Iran in 1979 to express support for the Palestinians and opposition to Israel and Zionism.

Lotem Finkelstein, the head of the Cyber Intelligence Department at Checkpoint Software Technologies, said that Muslim hackers in various locations, including Turkey, North Africa and the Gaza Strip, organized the attack together in honor Al-Quds Day, a Jerusalem Post report said.

The attack also comes as Israel prepares to celebrate “their” Jerusalem Day (Yom Yerushalayim) on Thursday night and Friday to mark the 53rd anniversary of the capital city’s reunification.

Checkpoint said that the attack was carried out by nine hackers and at this point they don’t have evidence that the attack is linked to Iran although the possibility cannot be dismissed.

Other Israeli news outlets reported that Iran was behind the attack but did not provide any proof. The “new” homepage did feature Iranian flags and other symbols.

Some of the many websites that came under attack were Chareidim10, a Chareidi news website, Yad L’Achim, United Hatzalah, dozens of Chabad house websites, several websites of religious Jewish high schools and post-high school programs, the website of the Cofix coffee chain, and the personal website of MK Nitzan Horowitz (Meretz).

Israel’s security forces and firms have been on the alert for a potential Iran-based cyberattack in response to reports of the Israeli cyberattack on the computer system of the Shahid Rajaei Port, near the Strait of Hormuz.

Israel’s attack was reportedly in response to an Iranian attempt to hack Israel’s water infrastructure system in April. The attack caused a pump in the Sharon municipal water system in central Israel to cease operation, although it did resume operation shortly afterward.

“My Crisis With Eye Cancer Steeled Me For Covid-19 Battle,” Israel’s...