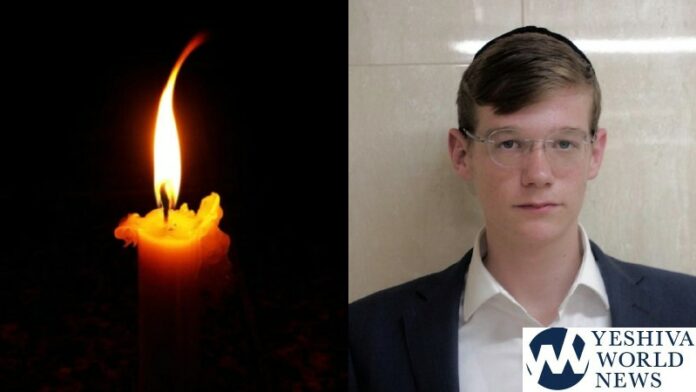 A tragedy occurred in Jerusalem on Motzei Shabbos, when a 17-year-old yeshivah bochur from Ramot was hit by a car and killed while riding his bike near his home.

Shmuel Aharon Glik, z’l, a resident of Ramot Aleph and a talmid of Yeshivas Ateres Shlomo in Rishon L’Tzion, was hit by a car as he was riding his bike on Rechov Sulam Yaakov.

Emergency medical responders arrived at the scene and found that Shmuel, z’l, had suffered a multi-system injury and wasn’t breathing and had no pulse. The EMTs evacuated him to Shaarei Tzedek Hospital while attempting to resuscitate him but unfortunately his death was pronounced upon arrival to the hospital.

Shmuel is the son of R’ Chaim Zevulun and Naama Glick. Naama is a nurse in Shaarei Tzedek and was on duty when the accident occurred. She waited at the hospital for her son to arrive and tragically didn’t even have a chance to say goodbye.

Naama’s father and Shmuel’s grandfather is the well-known Rav Noach Hertz, who fell into Syrian captivity when he was serving as an IDF pilot in the Yom Kippur War. His plane was shot by a Syrian missile and he woke up in a Syrian hospital without his right leg. He was thrown into a cell where he spent the next four and a half months in solitary confinement and was tortured during interrogation. He was released after eight and a half months as part of the captive exchange deal between Israel and Syria and became a ba’al teshuvah shortly later.

One of the niftar’s relatives said that even during the lockdown when Shmuel wasn’t in the yeshivah, he and his brother went to Moshav Yesodot where his grandfather Rav Hertz lives and learned b’hasmada there. Shmuel was known as a masmid who was always mapkid to adhere to his learning sedarim and was beloved by his friends.

This is the second tragedy to occur in Ramat Aleph over Bein Hazemanin within just a few days. On Thursday, a young avreich that lived in the neighborhood, R’ Akiva Krauss, z”l, 24, drowned in the Kinneret while on a vacation with his family, leaving behind a wife and baby.