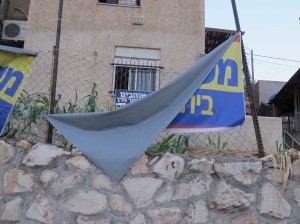 As the 18 Cheshvan municipal elections near, the atmosphere in many cities is heating up. In Beit Shemesh, the Abutbul campaign filed a police complaint against mayoral candidate Eli Cohen, accusing his campaign of vandalizing elections signs around the city.

Campaign officials of the incumbent, Mayor Moshe Abutbul, accuse the Cohen campaign of vandalizing opponent election signs during recent weeks. They explain they enlisted 100 volunteers who plastered the old area of Beit Shemesh with signs valued in the tens of thousands of NIS. They visited the area and were shocked to find “all” of the signs were torn down or ruined.

The Abutbul campaign has hired attorney Avi Schindler whose staff prepared the case ahead of filing a police complaint, a file that contains photos to back allegations. Schindler is demanding damages amounting to close to 250,000 NIS.

Abutbul officials explain that assumed Cohen would at the very least educate his people as to what constitutes acceptable behavior in a law-abiding country and even more important, to teach campaign supporters that each candidate has the right to fair dialogue without fear of intimidation, violence and vandalism.

Responding to the allegations, officials in the Eli Cohen campaign state the web of lies from the Abutbul campaign does not end. The pressure of possibly losing the election is taking its toll for after hundreds of Eli Cohen signs were destroyed last week, the mayor now tries to complain about actions that were not committed. We urge police to investigate and uncover the truth regarding the false allegations and unjustified complaint that is wasting their time.