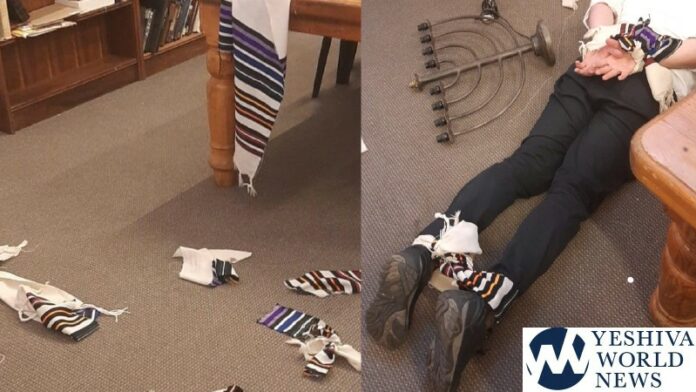 A disturbing incident took place on Thursday morning in a shul that houses a kollel in South Africa when thieves ripped a tallis into strips to tie up the Rav and two avreichim, leaving them on the floor of the Ezras Nashim as they stole their belongings and ran off, B’Chadrei Chareidim reported.

There were only three men left in the Kollel in Kehillas Shomrei Emunin in Johannesburg on Thursday morning when the armed thieves entered. After they tied up the men, they stole the men’s phones, the kollel’s laptops, and a car belonging to one of the avreichim.

The building is guarded by a private security company whose guards regularly patrol the area but for some reason, the guards somehow missed the incident.

While the men were trying to free themselves from their restraints, the non-Jewish cook who prepares the food for the Kiddush on Shabbos discovered them on the floor and called for help.

Only two days before the incident, a Jew who lived close by to the shul was murdered during a robbery, so despite the traumatic incident, the men were fortunate to have escaped with their lives.

“What happened only strengthens the belief that the Torah protects us,” one of the mispallelim told B’Chadrei. “The thieves could have shot them – it was mamash a neis.”