The Chareidi community in London is dealing with a tragic and disturbing incident after the chief pathologist of Stamford Hill ordered the delay of the release of the body of Rivka Shamaya, a’h, a young girl who passed away of cancer a week and a half ago.

Hospital officials apparently suspect that the girl’s parents injected her with a medication without coordination with the hospital, which they claim was a fatal error that may have accelerated her death, and insist on performing an autopsy. This is despite the fact that the girl’s condition had been deemed terminal by the hospital’s doctors and they had sent her home to die. It was only then that the parents obtained medication not yet approved in the UK which ultimately prolonged the girl’s life.

A family member told B’Chadrei Chareidim that “the hospital gave up hope on saving the girl’s life a long time ago and made a decision to release her to her home. Her devoted parents took care of her at home. Meanwhile, after extensive efforts, askanim obtained special medications which prolonged her life. However, these medications aren’t yet approved for use in the UK. Now, despite the fact that the parents successfully extended their child’s life, the authorities are cruelly harassing them.”

Family members, Rabbanim and askanim are waging a legal battle against the authorities’ intention to perform an autopsy.

The Beis Din Tzedek “D’Hishachdus Kehillos HaChareidim in London published a kol koreh on Tuesday entitled: “Call out to Hashem with koach.”

“Please continue to daven that the nifteres, Rivka, a’h, be brought to kevruah quickly,” the letter stated. “The kehal is requested to increase tefillah and tachanunim and if possible to say the following pirkei Tehillim in order: 40, 100, 57, 58, 59, 75, 140 as a segulah as brought by the Chasam Sofer. All the mosdos HaTorah and schools should recite the Tehillim to arouse Rachamei Shamayim that the nifteres be brought to kevurah quickly without any harm, chas v’chalilah.” 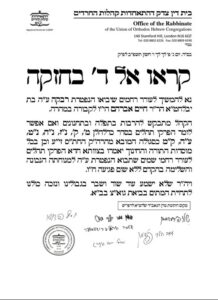