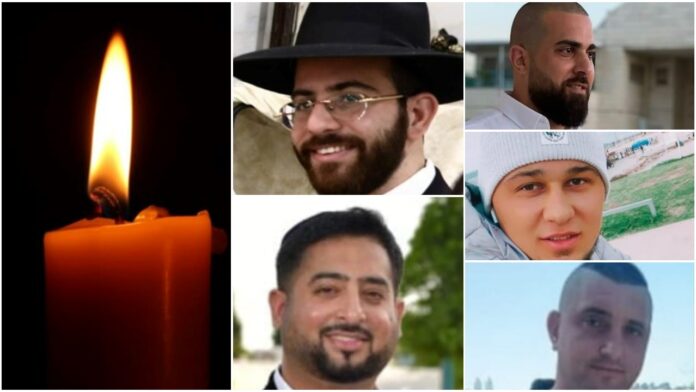 The terror attack in Bnei Brak ended with five murdered victims after a terrorist went on a shooting spree in the city.

The victims were identified as the avreich Reb Avishai Yechezkel, h’yd, a 29-year-old melameid in the Talmud Torah Ohr Dovid, murdered while taking his two-year-old son for a walk in a stroller to put him to sleep. He left behind his son, his wife, who is in her eighth month of pregnancy, parents, and siblings

Reb Yaakov Yisrael Shalom, h’yd, was a 36-year-old father of four who was murdered as he was driving his car on the streets of Bnei Brak near his home. He is the son of HaGaon HaRav Meir Shalom, z’tl, a prominent Rav of the Teimani community in Bnei Brak, who was niftar of COVID last year.

A third victim was an Israeli Christian Arab, Amir Khoury, 32, from the town of Nof Hagalil in northern Israel. Khoury was a police officer, serving on the Bnei Brak motorcyclist responders team and was one of two officers who saved countless lives by shooting at the terrorist. Unfortunately, he was fatally wounded during the ensuing exchange of fire. He was rushed to the Beilinson Medical Center but his death was pronounced shortly afterward. In the past, Khoury saved an avreich from drowning.

The other two victims were foreign workers from Ukraine, Alexander and Dmitry, ages 23 and 32. As of Wednesday morning, no further details about their identities have been released.

The terrorist was identified as Dia Hamarsha, a 27-year-old Palestinian from a village near Jenin, who was in Israel illegally, working at a construction site in Bnei Brak. He had served a 6-month prison sentence in Israel in 2015 for ties to a terror group and illegal weapons offenses. Security forces believe that he perpetrated the attack in Bnei Brak due to the fact that he was familiar with the area.

Armed with an M-16, he arrived in Bnei Brak on Tuesday night at 7:56 p.m. by car, and began shooting people, first murdering the two Ukrainian workers near a makolet on Bialik Street. He then noticed Reb Shalom, h’yd, passing by in his car and opened fire through the window. He then continued to Rechov Herzl, where he murdered Reb Yechezkel, h’yd, as he was leaning over his two-year-old to protect him from the gunfire.

It was on Rechov Herzl that Khoury and another police officer pulled up on motorcycles and fired at him. Hamarsha returned fire, hitting Khoury, but then was hit and killed by the second officer.

A second Arab was arrested in the area following the attack for suspected assistance to the shooter, and a third suspect was arrested later on Tuesday night on the outskirts of Bnei Brak.

Israel Police is now on the highest alert since Operation Guardian of the Walls in May 2021 in the wake of three terror attacks in a week which left 11 dead.