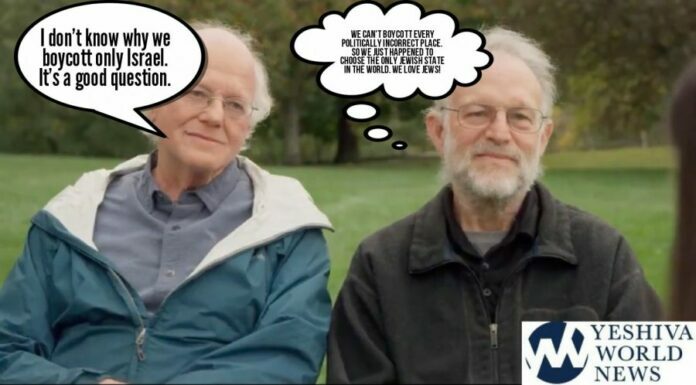 According to an agreement signed earlier on Wednesday between Unilever and the Israeli Ben & Jerry’s franchisee, sales throughout Israel will continue indefinitely, without restrictions or discrimination, in all parts of the country.

A number of US states divested from Unilever in the wake of the Ben & Jerry’s boycott against Israel due to their anti-BDS laws.

The agreement is part of a settlement reached after a lawsuit was filed in a federal US court on behalf of Avi Zinger, CEO of Ben & Jerry’s Israel, by the Louis D. Brandeis Center for Human Rights Under Law.

As part of the agreement, Unilever sold all its Ben & Jerry’s interests in Israel to Zinger. Zinger will continue to sell Ben & Jerry’s ice cream throughout Israel but not under the auspices of Unilever and Ben & Jerry’s, and will be required to use Hebrew and Arabic labeling rather than the original English labeling.

“The decision not only ensures that Ben & Jerry’s factory in Israel and its diverse staff will be protected, but also that the company’s customers, Jews and Muslims, Israelis and Palestinians, will not be the targets of the delegitimization campaign against Israel.”

“Israel appreciates Unilever’s constructive and respectful manner in resolving the issue and its unequivocal stance against anti-Semitism and the agenda of BDS organizations.”

Lapid added: “The anti-Semites will not defeat us. Not in ice cream either. Fighting de-legitimization and the boycott movement in every arena, mentally, economically and ethically. The Ben & Jerry’s factory in Israel is a microcosm of all stripes of Israeli society.”

“Unilever has used the opportunity of the past year to listen to perspectives on this complex and sensitive matter and believes this is the best outcome for Ben & Jerry’s in Israel”, a company statement said. “The review included extensive consultation over several months, including with the Israeli Government”.

“Unilever rejects completely and repudiates unequivocally any form of discrimination or intolerance. Antisemitism has no place in any society. We have never expressed any support for the Boycott Divestment Sanctions (BDS) movement and have no intention of changing that position. Unilever is very proud of our business in Israel which supplies everyday household products to people across the country. Today, Unilever Israel employs around 2,000 people of diverse backgrounds, has four local manufacturing plants, and works with a network of around 2,000 local suppliers and service providers – helping to support the livelihoods of tens of thousands of Israelis across its value chain.”

“Today’s settlement is a major defeat for BDS and an enormous victory for civil and human rights,” said Alyza D. Lewin, president of the Louis D. Brandeis Center for Human Rights Under Law. “Last July, when Ben & Jerry’s announced that it would not renew AQP’s license, BDS activists believed they’d achieved their goal of getting Ben & Jerry’s to boycott Israel. But Avi Zinger stood up for what was right. He refused to discriminate against customers based on where they live – which is what BDS proponents were demanding. The lawsuit the Brandeis Center filed on Avi’s behalf exposed the hypocrisy of the BDS movement and demonstrated how BDS harms the very Palestinians the movement claims to support.”

“Today, those who promote cooperation and coexistence vanquished those who endorse bigotry, discrimination, and hate. BDS tried to stop Ben & Jerry’s from being sold in Israel. They lost. Now, thanks to Unilever’s principled stand, Ben & Jerry’s will continue to be sold throughout Israel and Judea and Samaria by Avi Zinger. With this settlement, Unilever has ensured that Avi has the right – for eternity – to continue doing what he has done for decades as the exclusive producer and distributor in Israel of Ben & Jerry’s premium ice cream. This settlement enables Avi to continue providing jobs for refugees, new immigrants, and the disabled; economic opportunities for Palestinians; and support for Israeli-Palestinian coexistence programs and other human rights initiatives. Other corporations should take heed: BDS is bad for business. Discrimination never pays. Boycotts are not the answer. Engagement, cooperation, and coexistence are the true corporate avenues for peace.”