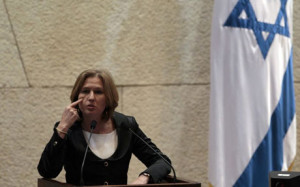 In her capacity as chairperson of the Dayanim Appointments Committee, Justice Minister Tzipi Livni has disqualified candidates who are family members of committee members. She succeeded in enlisting a majority of committee members to disqualify a son of HaGaon HaRav Tzion Boaron Shlita, Rabbi Yinon Boaron and the brother-in-law of Chief Rabbi David Lau Shlita, Rabbi Ariel Switzer.

Rav Boaron was reportedly quite angry over the decision, angrily walking out of the meeting.

Livni was acting on a complaint filed with the State Comptroller’s Office, as was reported by YWN-ISRAEL.

After the five-hour meeting 60 names remain on the list which was originally 74 candidates. The committee is expected to select the new dayanim in the next meeting.

Some feel it was discriminatory to disqualify candidates who have the credentials for the post just because family members are on the appointments committee. They question why the relatives on the committee were not simply removed from the votes on their candidacies instead of removing them from the list as was done.