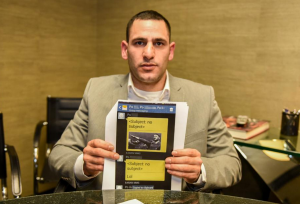 Ex-NYPD officer David Attali claims in a lawsuit that he was subjected to such virulent attacks on his Jewish faith by fellow cops at the World Trade Center police command, he had no choice but to resign from the force.

Attali, 31, is an Orthodox Jew with dual US-Israeli citizenship. He claims that his fellow police officers vandalized his locker with anti-Semitic messages, called him a “dirty Jew,” gave the Heil Hitler salute when they saw him, and sent hostile text messages. He is suing his department, five police officers and four supervisors from his precinct, according to the New York Daily News.

When requested to transfer out of his police command at the World Trade Center to somewhere else, his supervisors refused and did nothing about the harassment, according to the lawsuit.

Attali is a six-year veteran of the force. He reported his problem to the NYPD’s Office of Equal Employment Opportunity in May of last year. According the New York Daily News, the office said they could not confirm his allegations of verbal abuse and harassing text messages and that they could only substantiate that his locker was vandalized.

According to his lawyer, Attali made the decision to quit the force in August when he could not take the harassment anymore. He also said that Attali has kept evidence of the harassment, including secretly recorded audio and backlogs of offensive text messages.