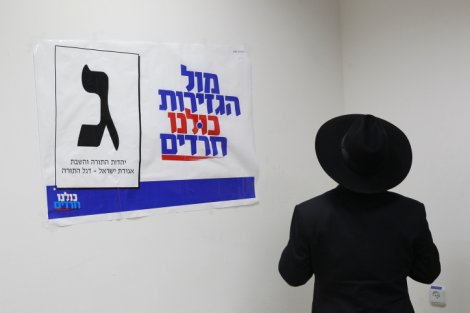 In a move that surprised many, Modi’in Illit Mayor Yaakov Gutterman delivered a very pro Yahadut Hatorah address, citing it was the only party working tirelessly against the “gezeiros” leveled at the chareidi tzibur. Gutterman has been at odds with the Degel Hatorah leadership over the past year, but with elections on the horizon, he stood up and acted for the good of the tzibur at large, putting personal considerations aside.

Gutterman reminded his audience that Maran HaGaon HaRav Aaron Yehuda Leib Shteinman Shlita is calling on each and every person to persuade another to get out and vote for Yahadut Hatorah on Election Day.

His address was followed by the Rav of Brachfeld HaGaon HaRav Yaakov Zickerman Shlita, who stated when we see gedolei yisrael shlita coming out we must become aware of the significance of the event and the need to act as they instruct us to be MeKadesh Shem Shomayim. He delivered criticism against the Yerushalmi branch, the faction that split off from Degel Hatorah to follow HaGaon HaRav Shmuel Auerbach Shlita. He stated “One who separates from the tzibur and does not vote on Election Day take part in destroying the world and creates a Chilul Hashem. One must select Gimmel to act against the insults to the Torah and women”.

Yahadut Hatorah MK Yaakov Asher followed. He spoke of the difficulties of the past years and how he personally witnessed Rav Shteinman shed tears after hearing of the harsh government decisions against the tzibur lomdei torah.

“During the last administration, the secular parties targeted everything that is important to chareidim and the Torah world. If we do not act now it may be too late. There are those who plan additional gezeiros against us. Without us the situation would be far more serious. We fought back like lions. There wasn’t a day during which we did not fight back. There are Yesh Atid MKs who sought psychological care because of us. Truth be said, I used to believe we do not need a campaign but we must persuade others. We must reach eight seats…It is all in the merit that we consult with Maran the Rosh Yeshiva who often reminds us of matters we ourselves forget. We are astounded as times. Our job is to serve the wishes of gedolei yisrael and this is what we do”.