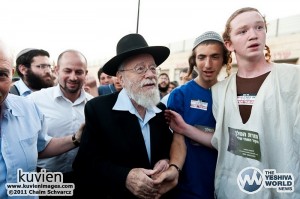 Rabbi Dov Lior Shlita, Rabbi Yitzchak Ginsburgh Shlita and others are calling on soldiers and border police to refuse orders when instructed to take part in taking over the Ohd Yosef Chai Yeshiva in Yishuv Yitzhar in Shomron.

A year after security forces took over the beis medrash, rabbonim are now calling on forces to refuse orders and not be a part of the force that maintains and operates in that area.

They lament the fact the military took control of the beis medrash on erev Pesach 5774 and remains to this day. They point out that the Torah prohibits the action for a number of reasons including gezel of the building, compromising the kovod of the beis medrash (Rambam Hilchos Tefilla Chapter 11), and due to the bitul Torah because the doors of the beis medrash are locked to them, citing the wicked during the time of Malchei Yehuda. Therefore the rabbonim call for insubordination rather than being a part of this illegal action, quoting the Rambam, Hilchos Melachim 3:8.

Yeshiva officials explain that in each generations there are efforts to silence the voice of Torah but these efforts will never succeed.