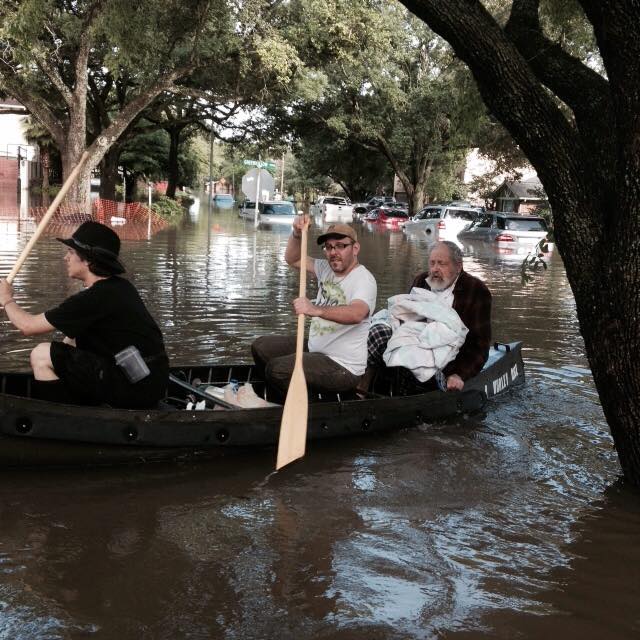 The Following is VIA OnlySimchas.com

An unprecedented downpour of torrential rain triggered “extremely dangerous and potentially life-threatening” conditions that centered on Texas and Oklahoma since Saturday.

The mayor of Houston confirmed two deaths Tuesday morning, raising the death toll to 10. At least 12 people were still missing, and countless more were evacuated amid the deluge.

In Houston, more than 80,000 people were without power and the flood waters closed roads including Interstate 10 and Interstate 45. Texas Gov. Greg Abbott declared a state of disaster in 24 counties on Monday.

The torrential downpour last night prompted the Toyota Center in Houston to ask people to stay at the arena following the Warriors-Rockets game 4 showdown. A few hundred fans stayed until 5:30 am Central time, when the flash flood warning ended.

The Toyota Center offered those that stayed with coffee, breakfast, and the opportunity to charge their phones. NBA player Dwight Howard even stayed in the arena and visited with fans.

The Meyerland area of Houston which houses the United Orthodox Synagogues of Houston was not exempt from severe flooding. In 2001, the same neighborhood surrounding the shul was severely damaged by Tropical Storm Allison, causing many in the neighborhood to rebuild their houses on stilts. Those that did not suffered again with their houses filling up again, up to 11 inches in some places. The community has not seen water levels like this since Hurricane Alicia in 1983.

The neighborhood was in the process of undergoing construction on the drainage system to prevent such a flood.

The Rabbi Emeritus of the community, Rabbi Joseph Radinsky, was at the center of the thoughts of many in the neighborhood as he is elderly and not well. This concern led two men, Morgan Davies and Donniel Ogorek, to row a boat to his home and carry him out of the flood. One neighbor, Robert Levy, reported that he was still in good humor even as he was being taken from the flood waters: “I want to assure everyone that Rabbi Joseph Radinsky was in punny form even as he was being rescued.”

After seeing the facebook post with the photo of himself the rabbi commented “Thanks for the beautiful picture. I guess I took quite a paddling. It was an either oar proposition.”

The men took Rabbi Radinsky to the home of Holly and David Davies which was not flooded. The Davies also opened up their house to the community to charge phones and get hot food.

Others waded during the storm to check on neighbors in the community. The community, having been through similar experiences in the past, has grown to look out for each other in times of need. In 2001, a father and daughter, both proficient swimmers, swam from home to home on a Friday night to knock on neighbors doors to check on them. At one point they swam with an elderly man on their back to bring him to the home of someone with a second story to their house.