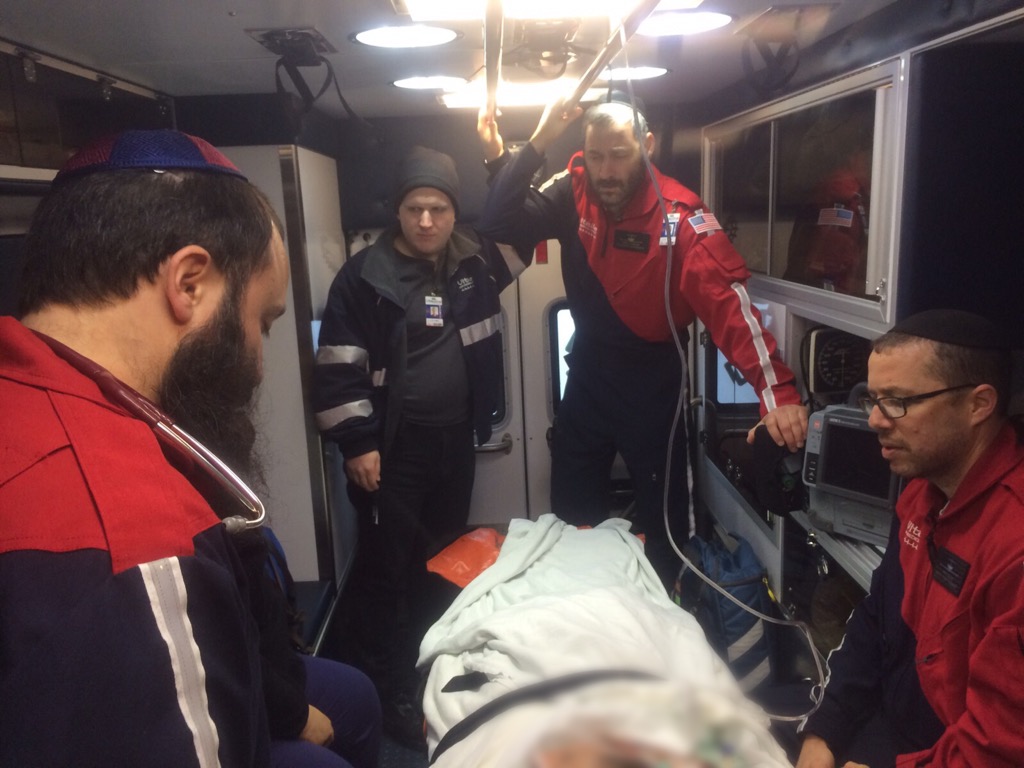 Professionalism, medical expertise and timeliness were all in high gear this past weekend as VitalOne defied the odds and executed a politically and logistically complicated emergency Medevac from Havana, Cuba to Miami.

It is safe to say that when Mrs. X left Israel for her much anticipated family getaway in Cuba she never envisioned returning by way of an elaborate airborne ICU taking up the entire first class cabin of El Al airlines.

The 70 year old woman’s vacation took an unexpected and potentially deadly turn when she collapsed Thursday morning in the lobby of her Cuban hotel. The victim of a sudden stroke, she was rushed to Cuba’s severely substandard hospital where it was determined that she had suffered an intracranial hemorrhage.

“I got the call Friday morning,” explains Isaac Leider, dubbed Rabbi 911™ for his world-renowned success in dealing with air medical transports. “There was no way the patient was going to survive in a Cuban hospital. The logistics for the 60 minute flight from Havana to Miami are always complicated. This time the complications were tenfold.”

Due to the holiday weekend, there was no one available to sign off on the necessary permits which would allow VitalOne to send an ICU jet to land in Cuba. Furthermore, assuming the Cuban airport handler could be reached and the permits secured, there were no beds available at any tertiary care (top medical) facility in Miami. Without an ICU bed assignment, the medical parole visa would not be approved.

No challenge is too great for the VitalOne team. They began reaching out to their high level contacts, amongst them a ‘black card carrying’ philanthropist, who requested anonymity. With just one call to the CEO of Baptist Hospital in Miami, a bed was procured.

But the challenges kept coming. For inexplicable reasons, Cuban immigration officials put a 24 hour hold on granting permission for the VitalOne jet to land and pick up the patient. Isaac contacted the Israeli Foreign Ministry Situation Room but needed someone in the United States with the ability to secure the permit to land. Enter Mr. Michael Wildes, Esq.; a well known immigration attorney and former federal prosecutor.

“I’ve worked with Isaac Leider on many occasions. When I see Rabbi 911™ on my caller ID, I know it is a matter of life or death,” explained Mr. Wildes, who returned my call while on vacation in Mexico. “VitalOne was facing a bureaucratic glitch and with no one available to countermand this order, there was a good chance the patient would not live.”

Michael Wildes, former mayor of Englewood, New Jersey and a 23 year veteran of Hatzalah, spent the next several hours working the phones well into Friday night, along with Isaac, to save this Jewish woman’s life. A board member of NORPAC (a political action committee working to improve Unites States and Israel relations) he reached out to Dr. Ben Chouake, the President of the organization, who in turn contacted Senator Menendez’ Chief of Staff, whom he has known for twenty years.

Mr. Wildes credits Isaac, who he dubs ‘an angel’ with doing a great job of smoothing the way, arranging for an available bed, collecting the proof needed for a medical parole visa, verifying that the patient would not become a medical charge in the Unites States and a burden to the taxpayers (traveler’s insurance is covering 100%), and securing the written assurances that there was no other medically mandated option to save this woman’s life.

The situations was further complicated since the patient is Israeli, and Israel has no diplomatic relationship with Cuba. Mr. Wildes reached out to United States Congressman Ed Royce of California who serves as the Chairman of the House Foreign Affairs Committee. Congressman Royce jumped into action; personally making calls to various State Department officials to help secure the permits.

“This was a truly heartwarming instance of partisan efforts. These are busy politicians who stepped in and used their time and contacts to affect a positive outcome. Everyone appreciated the fact that we were Observant Jews, nonetheless on the phones on Shabbos, committed to saving a life. VitalOne leads by example and I tip my hat to everyone who helped make this Medevac possible.”

By Shabbos morning, permission was granted and a bed waiting in the Miami hospital. The ICU jet landed in Cuba with a medical team and all the equipment necessary to safely fly the patient, at sea level, to Miami. Seventy-two hours later, thanks to life-saving surgical intervention, VitalOne was once again on the scene, flying her via air ambulance to Newark Airport where they had turned the entire first class cabin of an El Al flight into a completely retrofitted airborne ICU.

VitalOne was able to repatriate the patient where she will receive further care from Professor Zvi Ram at Tel Aviv’s Sourasky Medical Center. Thanks to VitalOne’s experience and know-how, they were able – with G-d’s help and the dedicated assistance of the various people involved– to get this patient the emergency medical care she needed to survive, all at no cost to the family; VitalOne procured insurance coverage for everything.

Proving once again how fitting the name VitalOne is for a team of medical transport experts that is considered the number one choice of doctors around the world, when vital air transport is needed to save a life.

Author’s note: VitalOne maintains the importance of choosing your vacation spot with a potential medical crisis in mind. At the very least, make sure your insurance provides for medical transport and/or purchase additional insurance when you book your flight. You never know.