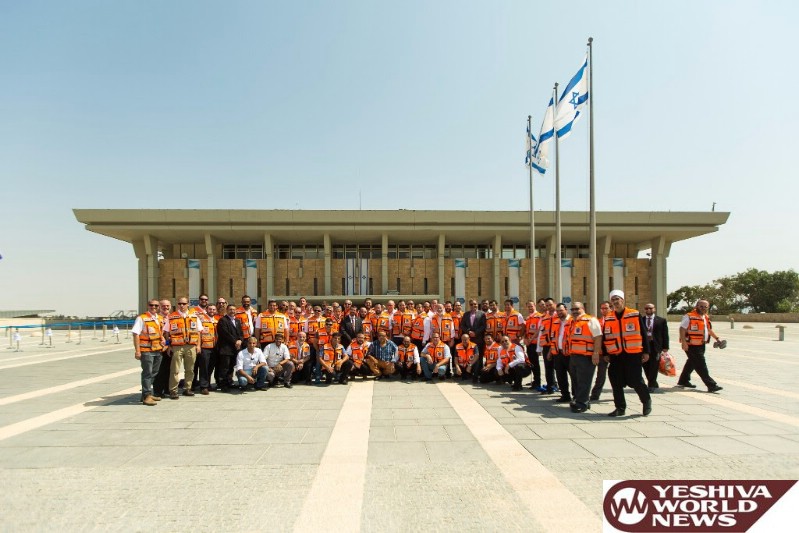 Knesset members from across Israel’s political spectrum gathered on Monday, 26 Tammuz, in the Dov Shilansky Auditorium of the Knesset to give an official salute and thanks to United Hatzalah of Israel and Israel’s search and rescue teams. The event was initiated under the auspices of MK Nurit Koren and MK Yisrael Eichler.

Many ministers and MKs attended the event including Knesset Speaker Yuli Edelstein, Opposition Leader MK Yitzchak Herzog, and Deputy Minister of Public Diplomacy MK Michael Oren, together with numerous others.

In MK Koren’s opening remarks she praised the work of the volunteers. “The scholars of the Talmud coined the term ‘he who saves a life it’s as if he saved an entire world’ and not just one person, not two, not only one person, and not only one family, owes their lives to you. Thousands of worlds are walking the streets and cities right now, they are traveling throughout the country, they are vibrant and full of smiles, worlds that you saved without expecting anything in return, without waiting for a letter of appointment. You chose to go to battle to save a life, to devote your lives, your days and your nights, your family moments and hours of rest to give real hope to every person.”

MK Eichler also expressed how impressed he was with the work of United Hatzalah. “I see volunteers from all religions and groups, and that is the beauty of your organization. We have a great generation of volunteers. Even though it is always said about the chareidi population that they take and do not give, you prove that you not only give but you motivate many other volunteers to give as well.”

Machane Tzioni party leader MK Yitzchak Herzog added to the sentiments expressed by the Speaker of the Knesset. “I must say that United Hatzalah manages a huge number of volunteers, and the goal to save every Israeli life is a great mitzvah. This is a wonderful and cause to integrate into the emergency rescue services. I saw you under fire during operations Cast Lead, Pillar of Defense, and Protective Edge, during attacks and difficult and complex incidents. This is a complex country. Complexity is part of our national strength, and the ability to reach out to everybody, even in a complex society, lends to it.”

Beer added a special thanks to Knesset member Moshe Gafni. “During all the years since the establishment of United Hatzalah, MK Gafni was on our side. I would also like to thank those friends who have helped me to build this organization. Chairman of the organization Rabbi Ze’ev Kashash, CEO of Isralife Eli Pollak and CEO of United Hatzalah Moshe Teitelbaum.” Beer continued to thank the 3,000 United Hatzalah volunteers as well as the 550 volunteers in the search and rescue teams across Israel. “These are the people who go out for days and nights in search of lost hikers or people who have fallen from great heights.”

Summing it all up Beer added, “With the help and bipartisan support of lawmakers in Israel, United Hatzalah will continue to grow and our volunteers will continue to save lives across our wonderful country, a country that we all call home.”

Beer concluded by giving a special tribute to United Hatzalah’s chairman, Mr. Mark Gerson, who came from the United States especially for the occasion.

MKs who attended the event: