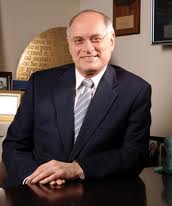 YWN had the opportunity to discuss the current situation in Egypt with Malcolm Hoenlein, who serves as the executive vice chairman of the Conference of Presidents of Major American Jewish Organizations.

In this 13 minute interview, Mr. Hoenlein shares some of his incredible knowledge of the region, who the Muslim Brotherhood is, who Egyptian opposition figure Mohamed ElBaradei really is, how this can affect the security of Israel, and other interesting items.

Hoenlein tell YWN that ElBaradei is a “stooge of Iran”, and says he hid the true information about the Iranian Nuclear program as head of the IAEA for years.

Malcolm Hoenlein is the executive vice chairman of the Conference of Presidents of Major American Jewish Organizations since June 1986. He is the founding executive director of the Greater New York Conference on Soviet Jewry and the Jewish Community Relations Council of New York.

YWN AUDIO LINK: Click HERE to listen to the interview.