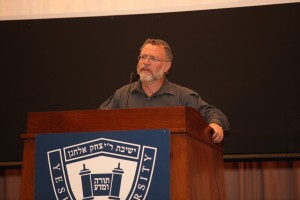 Speaking to a crowd of hundreds in Yeshiva University’s Lamport Auditorium, the mayor of Itamar, Rabbi Moshe Goldsmith, described the impact of five brutal murders on his small, close-knit community.

“For a community to lose a special family like the Fogels, there are no words to describe the pain,” Goldsmith said of the parents and three children murdered in Itamar on March 11. “This family has caused the entire Jewish world to wake up and realize that we can’t live our lives the same way anymore.”

During a presentation on Wednesday night, March 30, that featured photographs of the Fogel home and Itamar’s breached security fence, Goldsmith delivered a firsthand account of the night of the attack. “Families like ours were all in our houses, singing zemirot and celebrating Shabbat,” he said. “We had no idea what the terrorists were planning.”

Goldsmith explained how the attackers tested blind spots along the town’s fence and security camera for months in advance, then waited in an empty house next door for Tamar Fogel, 12, to escort school friends home before entering the Fogel home. A hand-written note of congratulations on the recent birth of Hadas, 3 months, was still hanging on the door.

“We’re on the front lines and so we’re targeted,” said Goldsmith, noting the town’s location in the heart of Judeo-Samaria. “This has been the hardest period in our lives. However, our response to these tragedies is not to give up—it is to build.” The Fogel home stands in a section of town that was constructed several years ago after members of another family were murdered by terrorists and their home set on fire.

To highlight the community’s heartfelt devotion to the land, Goldsmith showed a video of daily life in Itamar: children eating ice cream on benches, cucumbers growing in hothouses and chickens roaming backyards. “We are a people who just want to live a life of peace in Israel, yet every day we have to know things most people don’t know in a lifetime,” he said.

In a question-and-answer session, Goldsmith spoke about further security measures Itamar hopes to take, such as the purchase of another security camera and fence expansions that he expects will cost $80,000. But he added that vocal support for Israel from abroad, especially in the face of media bias and political opposition, was also critical. “I am amazed by the response of the American community, who has opened its arms to us to hear our story,” he said. “All we want is peace, yet we are the ones going around in bulletproof cars and buses and suffering terrible, terrible tragedies. The media has not written much about us, but everyone in this room can speak out, be brave and spread the truth.”

IDF veteran Adam Kugelman, president of YU’s Soldiers in Exile Club and a board member of the Israel Club, which sponsored Goldsmith’s talk together with the Yeshiva Student Union and Torah Activities Council, felt that the event provided an important personal connection for American Jews to the Itamar tragedy. “People read about it in the news and move on,” he said. “There’s so much in the news today. But to see pictures and hear a firsthand account, that’s critical. That creates a feeling.”

“We have to connect to Israel in any way we can,” said Rabbi Herschel Schachter, rosh yeshiva at YU’s Rabbi Isaac Elchanan Theological Seminary (RIETS), after the event, which also drew students from Rutgers University, Columbia University, New York University and Queens College. “We have to have more of an awareness that we are one nation.”