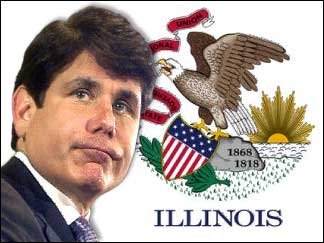 Former Illinois Gov. Rod Blagojevich was convicted Monday on 17 of the 20 public corruption charges against him.

The jury acquitted Blagojevich on one count of bribery and was unable to reach verdicts on two counts of attempted extortion.

The charges against Blagojevich included trying to peddle the U.S. Senate seat held by Barack Obama before he resigned to become president. Blagojevich has denied any intention of bribery.

Last August, after a two-month trial and 14 days of deliberation, jurors deadlocked on 23 of the 24 charges Blagojevich had faced. They found him guilty on one count of lying to FBI investigators, a conviction that could carry a prison sentence of five years.

The accusation that Blagojevich tried to profit as he considered whom to appoint to succeed Obama, among other allegations, prompted his impeachment by Illinois’ House of Representatives and his removal from office by the state Senate in 2009.

Ten of the counts against him in the current trial are wire fraud. The other 10 involve extortion and bribery. Most of the counts have a maximum penalty of 20 years in prison.

Blagojevich, 54, was taken into federal custody in December 2008, less than two years into his second term as governor. A federal grand jury indicted in him April 2009.

At the time of his arrest, prosecutors said court-authorized wiretaps caught Blagojevich offering Obama’s Senate seat in exchange for personal gain, including a job with a non-profit or union organization, corporate board posts for his wife, campaign contributions or a post in Obama’s administration.

He expressed frustration, according to prosecutors, that Obama transition officials were “not willing to give me anything except appreciation.”

“I’ve got this thing and it’s (expletive) golden, and, uh, uh, I’m just not giving it up for (expletive) nothing. I’m not gonna do it,” prosecutors quoted Blagojevich as saying.

Blagojevich also considered appointing himself to the post, mulling whether he might be better off being indicted as a senator rather than governor, and saying contacts he would make in the federal job would benefit him later, according to prosecutors.