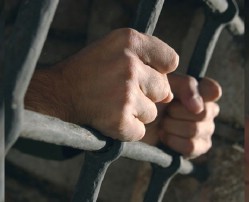 A former New Jersey prisoner’s demand for kosher food has triggered a debate over “who is a Jew.”

At issue: Must a prisoner prove that he is Jewish in order to get kosher food and, more importantly, who gets to decide — the individual, the state, or an outside religious authority?

Thomas Feldheim was being held earlier this year in the Middlesex County Adult Correction Center as he awaited extradition to North Carolina on a 2008 charge of ‘abducting’ a 13-year-old girl.

While being held in the North Brunswick jail, Feldheim requested kosher meals. Corrections officials sought advice from Rabbi Mendy Carlebach, director of the Chabad of North and South Brunswick and chaplain at the corrections center.

Under Halacha, traditional Jewish law, a person is Jewish by birth only if his or her mother is Jewish.

Carlebach’s version of the story is slightly different.

“I don’t recall telling anyone they are not Jewish,” he said in a July 11 phone interview. “I do recall being asked by the prison what makes someone Jewish. I said clearly by halachic facts it is someone born to a Jewish mother or who converted according to Halacha. I do not investigate anyone’s background.”

After Feldheim application was rejected, the inmate asked the ACLU of NJ to intervene on his behalf. Alexander Shalom, ACLU of NJ’s policy counsel, handled Feldheim’s case.

“Decisions about religious affiliation are deeply personal, and it is not up to the state to determine whether a person’s beliefs are sincerely held,” Shalom told NJJN. “The state should have no role in deciding if a person is sufficiently religious. The constitution forbids the state or its designated rabbi from determining whether Mr. Feldheim is Jewish enough.”

“We said to the county, ‘We were going to file a lawsuit’ and they said, ‘Hold on, let’s see if there is something we can do short of a lawsuit.’ By the next day, they remedied the situation,” Shalom said.

Feldheim received kosher food until two months later, on June 20, when he was sent back to North Carolina to stand trial for rape. Neither he nor his attorney could be reached for comment as they prepare for a court date next month.

‘Is he sincere?’
Carlebach’s issue with someone’s religious identity, he said, focuses on different aspects of observance. “I have no problem with people getting kosher food if they are not Jewish,” he said. “The only issue I would have is if someone considers himself Jewish and how that may affect other people who are Jewish. One example is a minyan. If they are going to be counted and people there are relying on them to be Jewish, that I may have a problem with.”

Feldheim’s attorney said he was pleased that the issue was resolved without a court battle.

“We think this is a rare case which impacted both Mr. Feldheim’s free exercise of his religion, but also impacted the establishment clause of the First Amendment. What you had was the county endorsing one sect of Judaism,” said Shalom.

Among the major Jewish denominations, only the Reform movement considers children of Jewish fathers and non-Jewish mothers as Jews. Chabad is an Orthodox movement.

Marc Stern, associate general counsel for legal advocacy at the American Jewish Committee, said the ACLU applied a proper interpretation of the separation of church and state.

“The ACLU’s position is certainly reasonable. So is the position of the chaplain, who says, ‘You can’t make me accept somebody as Jewish,’” said Stern.

“In this case it is relatively easy. The only test the state ought to make is ‘Is he sincere?’ It is not the state’s business to police this. It doesn’t matter whether he is Jewish or not. It is whether he has a sincere religious belief that he needs kosher food,” said Stern. “It should not depend on whether the rabbi thinks he’s Jewish.”